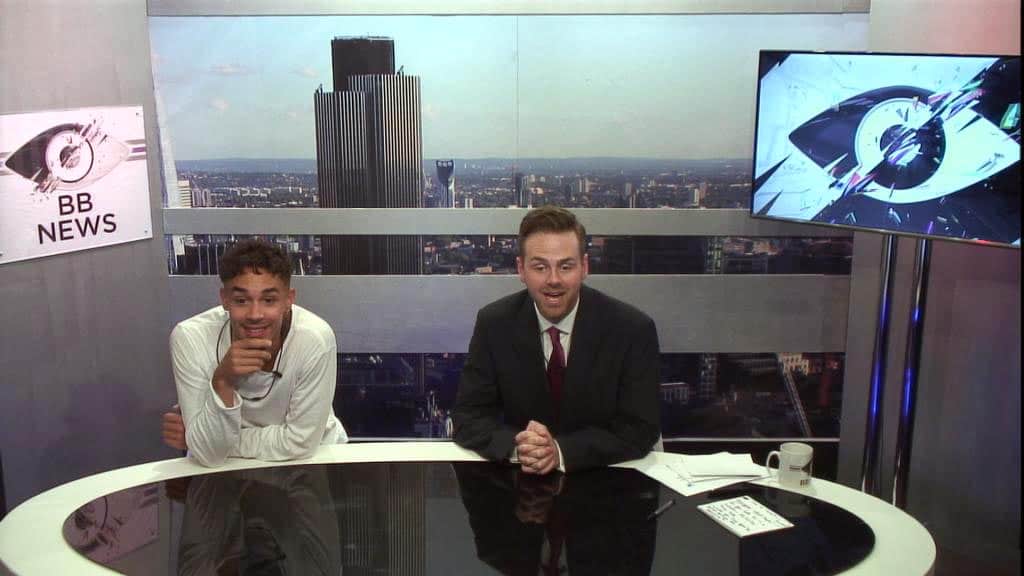 On tonight’s show: Andy becomes the Anchor of BB News as part of a task – and reveals headlines and stories to the housemates from the outside world. Jason reveals that he’s close to cracking and wants to leave the house.

In the pod, Evelyn opens up about Alex; “I knew Alex was attractive, I was worried to be attracted to someone so good looking! He has such a beautiful soul.” Sam tells her they have a ‘special bond’ and that they should kiss.

In the smoking area, Jackson questions Jayne on why she needs to know Jason’s reasons for evicting Ryan

Laura and Alex are in the pod, she reveals to him that she dreamt that him and Evelyn got married

In the smoking area, Jackson believes that Jayne is ignoring him, Sam tells him he hasn’t noticed anything

Big Brother gathers housemates on he sofas for the task. Andy has become a news reporter, he will be reporting on news headlines about the housemates, and on news from the outside world

As part of the task, Andy interviews Jackson. Jackson agrees he is an ‘emotional’ person and that his ‘tears are not doing good for his street cred’

Next, Andy breaks news from the outside world. Housemates are asked if they think the following headlines – ‘Britain voted to leave the EU’, ‘Mick Jagger is to become a father’ and ‘the UK has a new Prime Minister’ – are fact or fiction. The housemates’ reactions are mixed

The housemates are shown a clip of Lateysha when she appeared on Bit On the Side. Lateysha asserts that Jason is the biggest game player in the house

In the smoking area, Jason asks some of his housemates how to play a game in the house. Andy answers; “Trying to be everyone’s friend, never giving a definite opinion…only simple things to trying not to get nominated.”

Jason understands why Lateysha called him a game player, he reveals; “The whole thing has got me down, I’m trying to keep calm…I’m getting to the point that I’ll explode.” Jayne and Andy reassure him that the public are voting for him

Jackson is in the diary room talking to Big Brother about being emotional; “I’m trying to be as honest as I can. I ain’t proud to say that I’ve cried on telly in front of people…Its hard in here.”

As a reward for housemates passing the task, Big Brother gives the housemates face paint

In the smoking area, Laura reveals to Alex that she ‘always says how lovely he is’ when she’s in the diary room, Alex believes her

In the smoking area, Jason reveals that he is ‘borderline cracking’, Alex and Andy reassure him

On the sofas, Evelyn reveals that she feels more confident when she has had a few drinks, Jayne understands however advises her to ‘curb her drinking’

In the diary room, Sam has noticed that Jason is ‘struggling’ in the house and that he should ‘be more open’; “Just let it out mate!”

In the kitchen, Jackson asks if Jayne has been distant with him, she disagrees, ‘not at all’

In the diary room, Jackson reveals he wouldn’t be surprised if he’s next up for eviction; “I’m nervous and scared…”

Most of the housemates are in bed, Jayne advises Jason to ‘brush himself off’ and ‘just get through the last week’