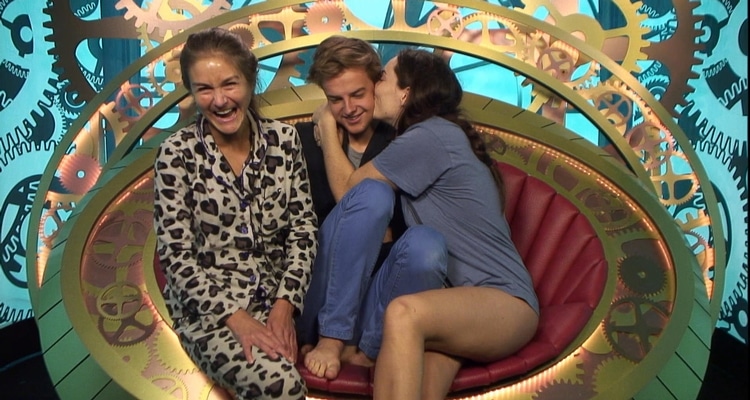 As we enter a second week with Brian, Nikki and the loathsome Helen aka apparently “legends” in the summer series of Big Brother we have to ask questions of Channel 5 as viewers. Have they lost the plot or was this idea planned all along? For me it seems like the BB bosses have badly lost their way and are now grasping at straws in order to keep this series afloat. Whilst I welcomed the idea of popular former housemates re-entering the BB house it has now surely run its course and they should make their exit stage left as soon as possible. They have very definitely over stayed their welcome! Why you may ask? The answer is simple – rather than being a feature point of a long running summer of a new bunch of housemates they are in danger of being the main talking point and thus the main memory of this series. We will in years to come remember this series as the one which was so boring they had to dredge up controversy from outsiders thrown into the house especially to shake things up. And that is a shame since I firmly believe that this bunch of proper housemates have more than enough about them to entertain us through the summer if they are left to their own devices.

The legends idea could have been a great success but it needed I suspect more planning. Why did Channel 5 not have a contingency plan to keep “legends” in the house but rotate them after the first week. It wouldn’t have been difficult to persuade three more ex housemates to swap with Brian, Nikki and Helen last Friday and keep the house fresh but Channel 5 took the easy route and just kept plodding on with creating bad feeling and arguments. What I would have loved to see is three more of the fun loving ex housemates to bring the quieter characters out of their shells and invigorate some laughter not nastiness in the house. Just imagine Bianca, Bubble and Brian (Dowling) bouncing around the place having a giggle and getting everyone to join in with the fun.

The Bunker Bores have gone stale in my view. Even Nikki has gone very quiet now and it really has turned into the “Helen Show” once more. I had enough of that last year and don’t want to see it for much longer this time around. Big Brother used to be all about watching characters develop, come out of their shells and enjoy each others company. Obviously in such a tight environment that led to arguments but nowadays it doesn’t seem to be called a successful show unless it is all about arguments and fighting. It must be such a strain actually living in the house whereas it should be a once in a lifetime enjoyable experience for housemates. Not a strenuous mental challenge. Some of the housemates have been lost totally in the maelstrom that is the complex lifestyle of Helen. Her warped sense of reality has rubbed off badly on Marc and has adversely affected his chances of winning the show. And while we are talking about Marc what is the deal with extending his immunity from nominations and ultimately eviction? Are Channel 5 really that dependent on such a troublesome and nasty wind up merchant to keep the series interesting? Why not allow the others to step up to the plate and show us what they are made of. After all the BB bosses chose them for a reason and they must have some sort of  gusto about them to entertain us or are Channel 5 admitting they got the audition process badly wrong this year?

Housemates like Sam, Simon and Joel have just evaporated into the ether in recent weeks and might as well be on a beach somewhere enjoying their summer rather than in deepest Hertfordshire. As someone in the house almost once said “Who Are They?”

If this timewarp theme is to be truly embraced why don’t Channel 5 re-introduce the four housemates cruelly evicted despite not being nominated? Perhaps this Friday they could swap the three legends plus one evictee for those housemates who were unceremoniously removed. That would be a nice twist and a pleasant surprise for a change.

The tasks that used to be such a focal point of the whole structure of a successful series have been booted into the background in favour of shouting and aggression. Surely it’s time for a complete re-think of Big Brother and getting back to basics. This of course should mean an instant return to the Live Feed as well. If you want the viewing public to engage and like or dislike housemates then we need to get to know them as people and not just in a short highlights show which only features one or two people arguing. You need to get the British public talking about the show again and that can only be achieved when we empathise and enjoy watching. Yes arguments and bitching will be involved but it should not be the only feature of BB. At the moment the lazy BB bosses seem to think it is the only way to go. Please change now before the programme becomes terminally beyond saving.

So my suggestions for rescuing BB this year include, 1) allow Marc to be nominated once more 2) remove Helen, Brian and Nikki asap, 3) show more tasks preferably longer ones taking a full 48 hours of constant effort 4) get the housemates smiling and enjoying themselves 5) re-instate the four unfairly evicted housemates and 6) most important of all show at least 2 hours of live action each and every day.