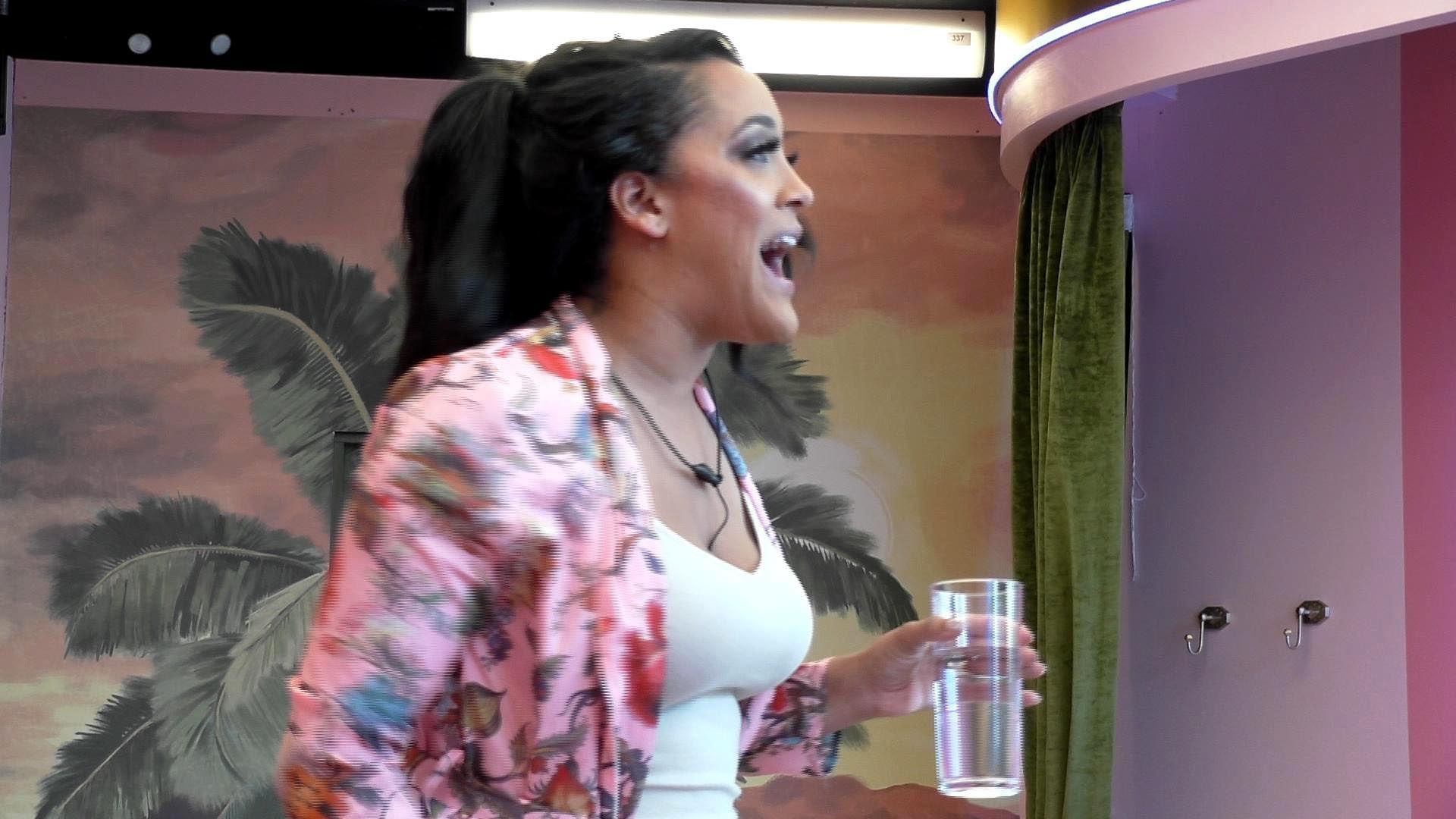 The first full week of the summer run of Celebrity Big Brother 2018 was jam-packed with news and drama, both inside and outside of the house.

Inside the house saw romance, drama, tears, and tantrums. The week would end with not one but two shocking departures. Outside the house saw that the show’s future still remains uncertain and fans anger at producers for yet withholding information.

We have a lot to get to, so let’s dive right in!

Kirstie Alley’s reign as “President” of the Celebrity Big Brother house came to an end this week as the housemates learned the results of the first shopping task of the series. They had four fails for not building the wall correctly and allowing “intruders” to grab green cards.

The number of fails allowed was just three. Because of this, the celebrities failed the shopping task and received a basic shopping budget for the week.

The housemates nominated for the first time this week. For her final act as “President”, Kirstie awarded a ‘pardon’ to Jermaine Pennant, making him immune for the week. Natalie Nunn had the most nominations with eight and Hardeep Singh Kohli got six, meaning they both would go head to head in the first eviction of the series.

Natalie did not take the news well as she went into a full meltdown, calling all the housemates fake and reducing both Gabby Allen and Chloe Ayling to tears after heated confrontations with both of them.

While celebrities may be living in the Big Brother house currently, let’s not forget that the civilian series of Big Brother is hitting our screens very soon. Friday saw Channel 5 release the first details about the upcoming series and it sounds like every Big Brother fans dream is about to come true.

“Coming only days after the Celebrity Big Brother finale, the original social experiment, featuring housemates from all walks of life entering a new-look Big Brother House,” Channel 5 said of the new civilian series.

The broadcaster also revealed Big Brother 2018 will launch between September 8 and September 14, with the official launch date confirmation coming this upcoming Wednesday. So keep an eye on our social media pages for the latest.

I don’t know about you but I’m already looking forward to the new civilian run.

The future of Big Brother after this year remains uncertain after Channel 5 boss Ben Frow gave his strongest indication yet long-running running reality show may not return to our screens in 2019.

Speaking at the 2018 Edinburgh International TV Festival, Frow said he is currently planning “for a year without Big Brother” but stopped short of saying the show will be cancelled.

“I have planned for a year without Big Brother,” Frow said. “But never say never. The contract runs out at Christmas.”

It is no secret that Frow is not too keen on keeping Big Brother on his channel, saying last year he’d “be happier” if his channel no longer had the programme on.

The wording Frow used has some fans thinking the show may be rested for a year if Endemol Shine cannot find another broadcaster for the show.

Big Blagger reached out to Channel 5, who said no further update on the contract negotiations, and that those negotiations are still ongoing.

The first romance of the series began blossoming this week between Jermaine and Chloe after it was revealed that he was writing secret messages to her using makeup sponges. Bit On The Side host Rylan Clark-Neal revealed what was written on the spinoff show, saying: “Think that’s fu**ed. Now. Gettin’ Out. No eyes fantastic.”

Yeah, no idea what that means.

But what we do know is Big Brother is punishing the housemates because of the secret messages. Regardless of the outcome of next week’s shopping task, the celebrities will be on basics for the second straight week. Only they don’t know it…yet.

The romance has fans in an uproar due to the fact that Jermaine has a wife on the outside. And on Saturday night’s show, Chloe tells Natalie he never mentions a wife and hinted to her he’s single. Oh boy…

The first celebrity bites the dust!

US reality star Natalie Nunn became the first houseguest to be evicted from the Celebrity Big Brother house on Friday night.

She lost out in the public vote to Hardeep and admitted despite causing drama and arguments, she would miss some of her former housemates.

A shocking exit and the fans want answers

Channel 5 put out a statement on Twitter, citing a “further incident” as the reason for his shocking exit. In Saturday’s highlights show, Rodrigo is seen entering the Diary Room and then the scene cuts to Big Brother informing the housemates Rodrigo “left the house” and would not be returning.

It is rather insulting to viewers when there is absolutely zero explanation – all this does is fuel wild rumours. Just last week they were saying “no housemate is bigger than Big Brother”, what happened to that? #CBB https://t.co/5jXctT7N1M

See if Rodrigo was planning on leaving he would have packed. Also housemates only leave at 1am when they have been removed. #CBB pic.twitter.com/paN8rBMfzN

What happened to no housemate being above Big Brother? The fans deserve an explanation on Rodrigo’s exit, especially with the different stories going around #CBB

They can't just do that, we need to know what happened! #CBB

What a first week it was inside the house. Whew! I’m grabbing some tea and biscuits. See you all next Sunday for another recap! Cheers guys!