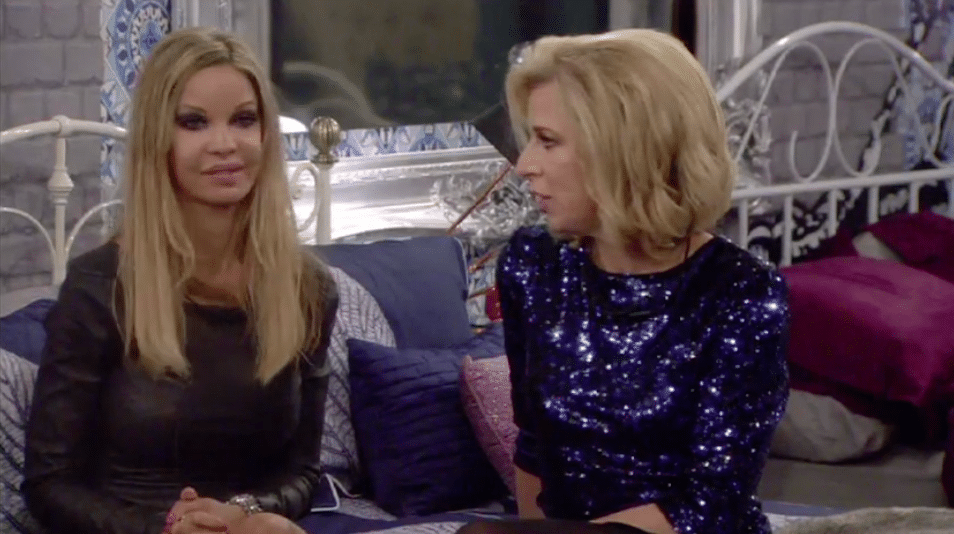 It’s finally here and fourteen celebrities enter the dark and twisted world of Celebrity Big Brother on a dark and stormy night.

Will they live happily ever after?

First to enter the house is the controversial Katie Hopkins, who bounces into the house and is immediately told to enter the enchanted Mirror to work on her caustic appraisals of the Housemates who enter after her, she is further told that she needs to work out who she thinks are the two least entertaining Housemates.

Her comments include that Patsy looks like she needs a sleep and that Ken Morley looks like he has come from a care-home. She also notes that Alicia’s face is not going to look good without make-up. She does seem to be pleased by the appearance of Keith, who she calls ‘cute’.

Meanwhile as the other Housemates enter the house, Ken Morley is invitingly told by Cami Li that he will see the rest of her tattoos ‘soon’. Perez greets Kavana with pleasure at seeing ‘another gay’. Perez goes on to tell the group that he can’t share a bed as he gets erect when he comes into close body contact with another person.

Katie then enters the house. Big Brother tells the Housemates to gather on the sofas and announces that Alexander and Chloe will be up for eviction. Katie does her duty and consoles both Housemates.

Perez grills Katie on her comments in the press about fat people and asks if her attitudes have softened after the making of her programme. She replies that she now understands that some people have reasons for being overweight but not excuses. He then accuses her of trolling and she rejects the claim.

Perez then asks Calum about his relationship with Lindsey Lohan and asks if he is still in touch with her. He answers, ‘No, we don’t talk.’ Calum then says that is was a mad time in his life and he was pretty screwed up and that the press didn’t help.

Perez asks Jeremy about his battle with drugs and Jeremy tells him he is now clean, Perez states ironically that he ‘does not judge.’

Nadia tells Chloe that she is right in having her guard up as they might be living with ‘axe-wielding murderers.’

Michelle tells Katie and Patsy that being from the US, she knows a lot more about Jeremy’s story than they do and it will come out in the end and explain a lot about him and his behaviour.

Big Brother opens the bedroom and the Housemates run to get their beds, the singles are taken first and Chloe and Cami Li have to share a double, another pair who will be bunking up is Perez and Ken. Perez assures Ken that there will be no funny business after Ken politely enquires about Perez’s sexual orientation.

Alexander, Keith and Kavana toy with the idea of starting a barber shop style quartet.

Cami Li talks about Perez in the Diary Room and the fact that he seems to be dominating the house, she says, ‘You don’t want a blogger, you want a human.’

Jeremy demonstrates to Katie that he can no longer breathe through his nose due to multiple breakages.

Keith confesses to Kavana, Alexander and Ken that at his lowest point he was drinking two bottles of whisky a day. Alexander tells them that he too has had his demons and that he has sought treatment for cocaine addiction.

Alicia talks Michelle and Katie through her plastic surgery and Michelle comments on the bond between Katie and Alicia and Katie says that it’s because she was ‘defender of the bed space’ as she guarded a bed for Alicia.

Perez quizzes Patsy on her love life but be won’t be led and tells him that she is ‘good’ at the moment and that she gets what she needs. Perez takes this to mean sex and Patsy looks embarrassed and says, ‘No, my kids are watching!’

Alexander treats Cami Li, Kavana and Ken to an impromptu version of his hit ‘Sunshine’ in the kitchen.

Katie tells the Diary Room that the first night isn’t as bad as she thought it would be and that it’s nice to see old timers like Cheggers in the house but she does say that Perez is going to get told to shut it soon. She adds that she is probably going to disagree wildly with some of the Housemates but for now they are all getting on.

Katie tells Perez about her epilepsy, that is started when she was twenty, is not due to head trauma and that she takes medication to control it.

You watch these events tonight at 9pm on Channel 5.