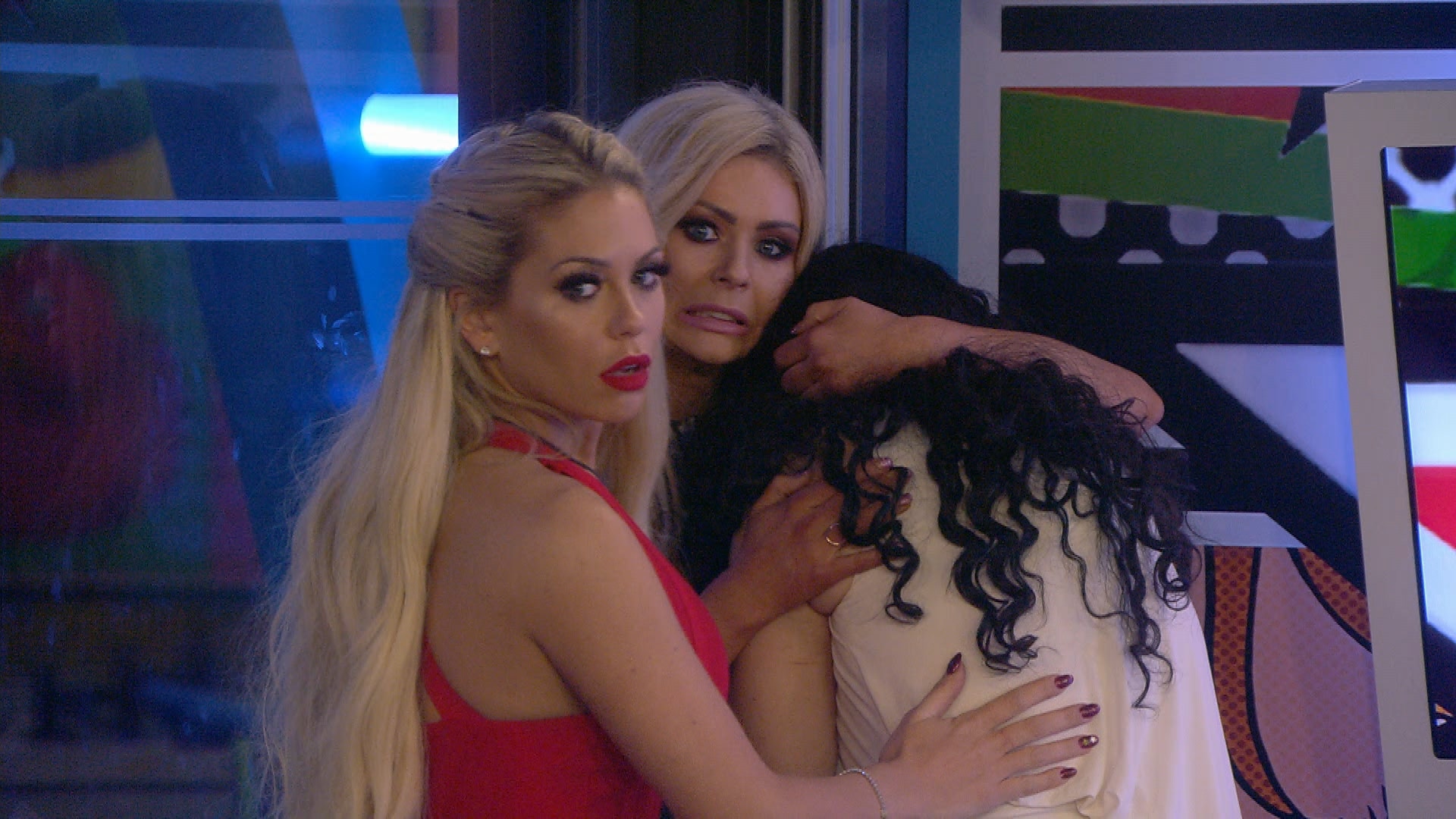 On tonight’s show: Chloe is evicted, James C is granted eternal immunity and Speidi are handed eternal nomination, which they are not happy about!

In the storeroom, Stacy and Jessica are discussing last night’s argument; Stacy tells her she ‘wasn’t having a go’ at her. Jessica tells her that she ‘didn’t mean to offend’

In the diary room, Jedward believe that they don’t deserve to be up for eviction; “We bring life to the house!”

Nicola comments ‘who would want to save her’ (Kim)? Spencer says; “She’s a con-artist!”

Jessica is called to the diary room for a secret task. Big Brother tells her that Nicola will be set a secret task; Nicola will have to carry out a series of secret missions based on her opinions of the housemates. However the real task will be Jessica’s, she will be given an earpiece and Big Brother will tell her first what Nicola’s secret missions will be. Jessica will have to secretly discuss with the rest of the house, what Nicola’s predictions will be. If Jessica and the rest of the house predict Nicola’s decisions correctly, the house will win a pamper hamper

Nicola chooses Jedward as the most unreasonable for not flushing the toilet, Jessica predicts correctly.

Nicola picks Jedward as the housemate most desperate for airtime, Jessica picks Kim.

Nicola apologises to Kim for picking her as the least deserving housemate, Kim understands it was part of a task.

Housemates are rewarded a pamper hamper for passing the task.

On the sofas, Jamie and Calum comment on Jessica. Jamie says; “To be fair she is fit though. It’s just her personality that annoys me but she is fit. Come back when you’re a 10!” The pair laugh, Calum confirms ‘she’s hot’.

In the smoking area, Nicola and Coleen comment that ‘Jedward can’t take criticism’.

In the bedroom, John is giving James C a ‘Jedward make-over’.

Housemates are gathered on the sofas for the eviction. Coleen received the most votes to stay and Chloe received the fewest votes and therefore was fifth to be evicted.

After Chloe is evicted, Stacy gets upset. Bianca and Nicola console her, Nicola tells her; “You cannot blame yourself, it’s a game!

Housemates nominate who they would like to be permanently immune from eviction, the majority choose James C, he comments; “So now they can see the real me!” In a shock twist, James C had to choose a housemate to receive permanent nomination, he chooses Speidi

James C tells Jamie that he thinks ‘Speidi are cool’ with his decision.

Stacy is crying in the diary room about Chloe’s eviction; “I feel so horrible…I didn’t see this coming.”

In the smoking area, Jamie is surprised that Bianca picked him for eternal immunity, Coleen says; “From a woman’s point of view, I’d be thinking why didn’t he pick me?” Jamie thinks she’s winding him up

In the bedroom, Speidi tells James C; “We look worse than Kim to you! You’d rather have that horrible lady in here than us! It’s crazy! I can’t stand that lady.” James C replies; “I’m sorry, I really didn’t think, I thought you guys wanted to go out. I can only apologise, I hope it won’t affect our friendship?” Heidi says ‘it won’t’

On the sofas, James C comments that he thought he was ‘doing the right thing’

In the bedroom, Heidi states; “It is a game, and now I need to re-strategise the game.” Spencer believes; “There’s no excuse! He (James C) knows what he’s doing! I’m fuming that Kim didn’t get that! It’s unacceptable what he just did!”

In the smoking area, Nicola and Coleen are talking about James C; Nicola believes he should not have picked Speidi, ‘wrong choice’. Coleen thinks James C ‘was gutted’ that he was picked for eternal immunity

In the diary room, James C is talking to Big Brother; “I just hope it’s not too heated with Heidi and Spencer. The decision I had to make was obviously the wrong one, I didn’t read the situation clearly…I thought that they would be absolutely fine with leaving, I’ve got it wrong and apologised. I’m not a reality show player…”

Jamie tells Bianca not to ‘take it the wrong way’ that he picked James C for eternal immunity; “I also thought to pick Nicola!”

At the dining table, Kim tells Calum; “What I like about you, I think you’re charming.” He replies; “I’m absolutely filthy behind closed doors!”

In the bedroom, Nicola tells Speidi; “I’ve not once said a negative comment about you.”

Spencer is annoyed that Nicola didn’t pick them for eternal immunity and stated his feelings about James C; “He’s a f**king piece of sh*t (James C)! (Spencer says to Heidi) We’re two different people, I love you, but I’m going to say what I’m going to say!”

Nicola is upset and heads to the diary room; “I feel so bad that I didn’t pick Heidi and Spencer, now they feel like I’m playing a game against them. I feel uneasy…I really like them. I don’t know how to play this game, I’m a mess!”

Most of the housemates are in bed, Jamie and Bianca are hugging in bed again

Spencer and Heidi are talking to Big Brother in the diary room, “Nothing surprising…we always said James C is the biggest player in the house! James C has chinned us! Nicola is now blocked on social media when we get out of here. Gone. Coleen just beat Chloe and Jedward! Nicola is playing a James C level game, she wants to win.”

At the dining table, Nicola is talking to Jessica about her and Speidi; “I will never speak to them; they can come to me. I’ve not done anything wrong.”