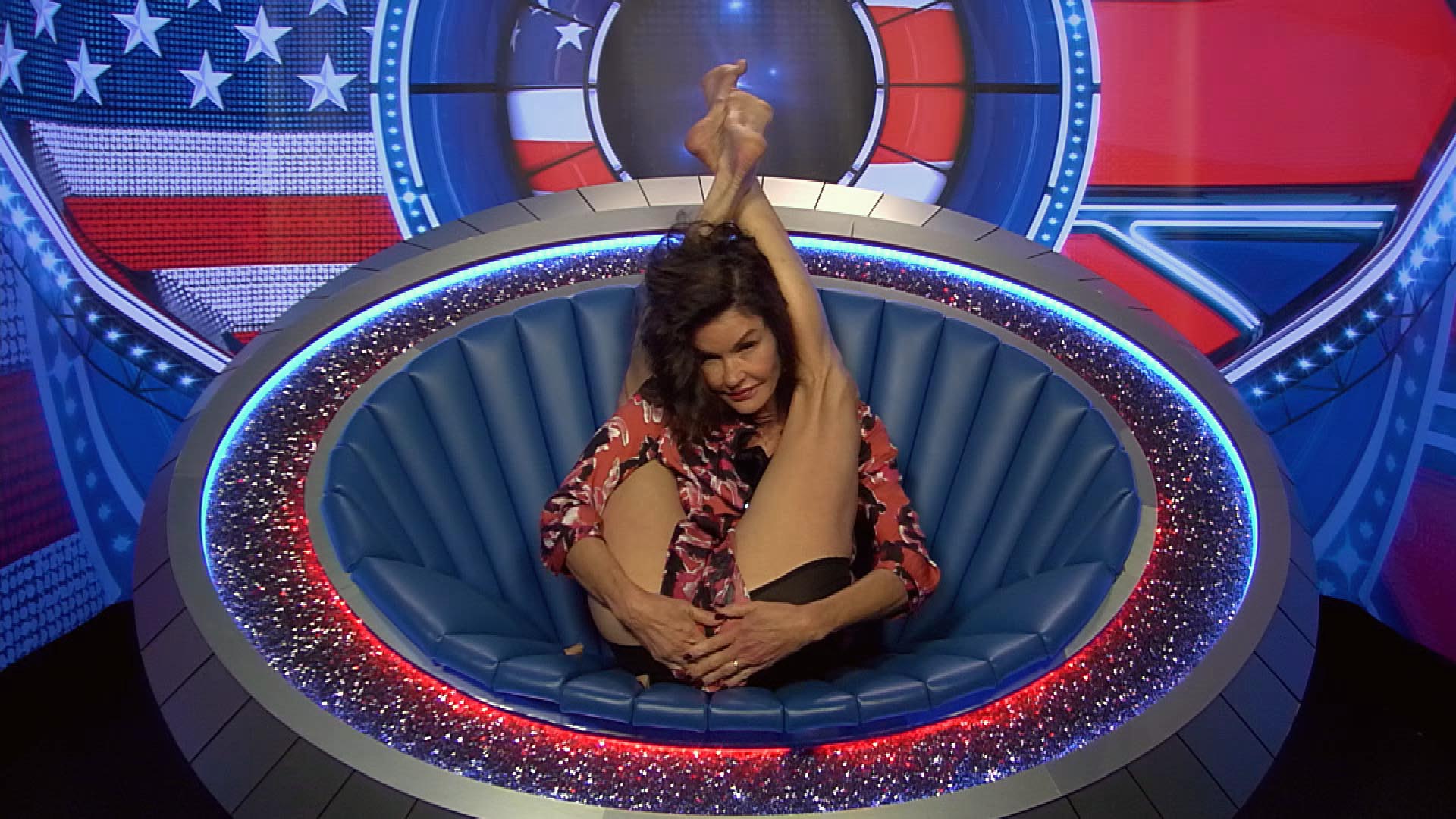 Tonight’s programme will feature highlights from the past 24 hours in the house during which time the US Housemates choose Gail, Bobby and Stevi & Chloe to join Chris in facing the public vote for the next eviction.  Gail doesn’t take the news well but the US Housemates’ nominations were tactical as they are playing the game.

The US/UK divide is growing as arguments ensue after Natasha drinks some of Jenna’s Kosher wine and they all argue about managing the food rations. Scoop gets accused of not acting presidential by sitting on the fence during arguments.

President Scoop is in the Diary Room talking about his country mates.  He says he’s “proud of the way I have dealt with Janice Dickinson…I’m going to do some good with [my presidency].”

Janice is teaching Stevi yoga in the garden

Jenna is talking nominations in the kitchen.  She is discussing who is allowed to nominate this week after discovering that only the Americans are able to nominate.  Jenna jokes, “that’s why Natasha plucked my eyebrows.”

Back in the garden, Janice tells Stevi, “the most important thing you can give a person is time not money.  It’s about following your dreams.  When I was a little girl I wanted to be a model…I wanted to escape into the art of the photograph…my priorities are first my sobriety, second my family, third to serve the community”. “I never wanted to become the type of mother who just has nannies, so I handed my crown to Cindy Crawford.”

Big Brother has gathered all the Housemates for a big announcement.  The US Housemates must choose which British Housemates to choose to face eviction, alongside Chris.  The US team choose Steviand Chloe because of the hot water situation, Austinsuggests “Bobby because he is annoying” but Scoop decides to be tactical and vote Bobby because “he is the glue” in that team, “we’ve got to decide do we want to be living, or is this going to be war?” Janice votes James, Jenna also thinks James should go because Austin is distracted by James and he needs to be more of a player in the game.  However, Austin is adamant he wants to vote for Gail. Scoop also votes for Gail. Scoop is very clear. “I’m not going to vote for someone who’s not going to go.  This is a younger fanbase with younger people.  We’re wasting our time not being selective with our votes.”  They decide Gail but it was a close decision between her and James.  They conclude by shouting, “go Team America!”

Meanwhile the UK Housemates are discussing how they feel about the nomination discussion taking place.  Natasha says, “it’s a very emotional thing, we will find out who they don’t like now.”

Big Brother gathers the Housemates to reveal the results of the nominations. Scoop stands  up and reveals the first housemate is Bobby, but he can’t remember the reason so says, “you farted, you sleepwalk…” but Big Brother insists he gives a the real reason so Scoop concludes, “you treated us poorly when you were the King.  It was also overheard that you said ‘don’t leave them any food’…also everyone was annoyed about the sleepwalking.”  Jenna stands up and nominates Chloe & Stevi – “There are many reasons why.  Not because you’re so fantastic and fun to be around, you bring such a good air to this.  I don’t see you guys going the full way…I don’t see fight in you to want to stay here. This is a game.  We want people to be here who are in it to win it…and I think people are uncomfortable with the amount of PDA.  Other than that we love you so much.”  Austin delivers the next nomination, “Gail, everyone knows without a doubt you are the cleanest person in the house, we thought that you are the glue that holds the team together and from a standpoint of competition, we felt that if we took you out then some of the other team members would fall apart.  We also felt that you’re a great woman, you’re just not a fighter, a competitor, so that’s how we decided to go for these decisions.”  Gail cries as Big Brother confirms that Gail, Chris, Chloe & Stevi and Bobby will face the public vote for the next eviction.

An upset Gail is comforted by Natasha who pleads with her not to leave.  An emotional Gail says, “I just feel paranoid.” Natasha offers to help her.

Stevi & Chloe are in the toilet Stevi says, “I’m shaking”  Chloe responds, “we can’t be scared darling…it’s just like a silly game of monopoly and they rolled the dice and our name came out…so don’t worry…it’s hard to be surrounded by people.”

Bobby offloads to Scoop, saying, “It’s a game…the worry that I have isn’t for me…do you know who I want to go, Gail because it upsets her dreadfully and I don’t want to see her crying…it upsets me.”  Scoop responds, “there are people in here that I don’t think are built for war…I want those people to leave because it’s going to get nasty…if your mind is not there, you’re not going to be able to take what’s being thrown at you.”

Jenna is in the Diary Room talking about Scoop “I think it might be a bit overwhelming for Scoop…he just kind of caved in but when you’re President you have to make a lot of difficult decisions. I think that a lot of my fellow Americans are just nominating because of friendship…it’s not about friendship, it’s about taking out major players that can be a major, major threat.”  She thinks Bobby is conniving and definitely playing the game.  “Feelings are feelings but business is business.”

As President, Scoopcalls a house summit and addresses the Housemates about the food shortage. He instructs the Housemates to have small breakfast and dinner but have a big lunch.

Janice is letting off some steam in the Diary Room by doing some yoga.

Big Brother gives the Housemates and extra bottle of Kosher wine.  Natahsa pours some glasses of wine because it’s the only bottle of red wine available. Jenna and Farrah get annoyed that there is only one bottle left and they are drinking it already.  Jenna says, “why do they have to drink the kosher wine?” Outside the UK Housemates are moaning about why Jenna should get all the Kosher wine to herself.  Chris says, “that f*cking wine business is getting on my nerves…I tell you, when I get out of here I don’t want to hear a f**king American accent again.”

Gail talks to Big Brother in the Diary Room.  She cries, “Just missing everybody and then I got nominated so I’m feeling a bit sh*t…I think that people don’t like me or I’ve done something wrong…I know it’s all part of the game but it’s not very nice not to know what you’ve done wrong.”

In the bedroom food is still the hot topic. Jenna tells Natasha and James, “you guys are even lucky we won it [the shopping list] for y’all.”  Scooptries to make peace with everyone but they all argue.  Scoop gets annoyed and Natasha walks out the room.

In the garden, Natasha lets off steam to the other UK Housemates.  She cries as she didn’t feel any of the UK Housemates backed her up with Farrah, Jenna and Scoop.

Jenna, Farrah and Janice are in the bedroom. Jenna tells them, “I don’t care about who is British…I want everyone to be able to eat and feel comfortable.”  Farrahjoins the rest of the housemates and starts an argument with Natasha, saying “I’m not about bringing negativity into the house….“shame on you and how you act…go do me a favour and fix yourself b*tch” as she sticks her finger up at Natasha. They start to scream at each other and all the other Housemates try to separate them. “Shut your gob!” Natasha shouts after Farrah.

Farrah is called into the Diary Room.

Natasha and Chloe continue to talk about Farrah, “she is a f**king tit”, Natasha tells James she is disappointed that he didn’t back her up.  He tells her, “I’m not playing the game.”  Natasha tells them, “ I have had enough of Farrah’s attitude…she has no decorum”

Farrah tells Big Brother, “I am p*ssed off…I am sick and tired of being f*cking bothered by scummy a**ed f*cking negativity and I’m sick and tired of someone bring this f*cking negativity into my life.”  She concludes, “I’m going to f*cking win every goddam challenge just to f*cking make  the person who pisses me off f*cking cry.” Big Brother asks Farrah to take deep breaths to calm down.

Elsewhere, Jennatells Gail, “you are in Big Brother, if you are too sensitive to handle you need to step out.”

Jennais still annoyed and tells Farrah, “Now the gloves are fucking off.”

Sherrieand Chris are mulling over the evening. Chris says, “what a funny situation to be in…so bizarre.”

Natashaand Gail are taking some time out. Natasha says, “I worry about you, you can’t keep taking everything so personal….people are playing a game.”  Gail says, “I’m done with Farrah…I’m not playing the game with her, anyway it is what it is,” mimicking Farrah inan American accent. Natasha tells her “be yourself and let them put their own nail in their coffin.”

President Scoopaddresses Jenna about the argument and tells her to let it go. Jenna is still annoyed with Natasha “I don’t know what that bitch has to complain about.” Janice tells him the Brits don’t think he’s acting presidential for not stepping in. Scoop gets frustrated “Don’t say nothin’ behind my back, say it to my face…right now I am being as presidential as f**K.”