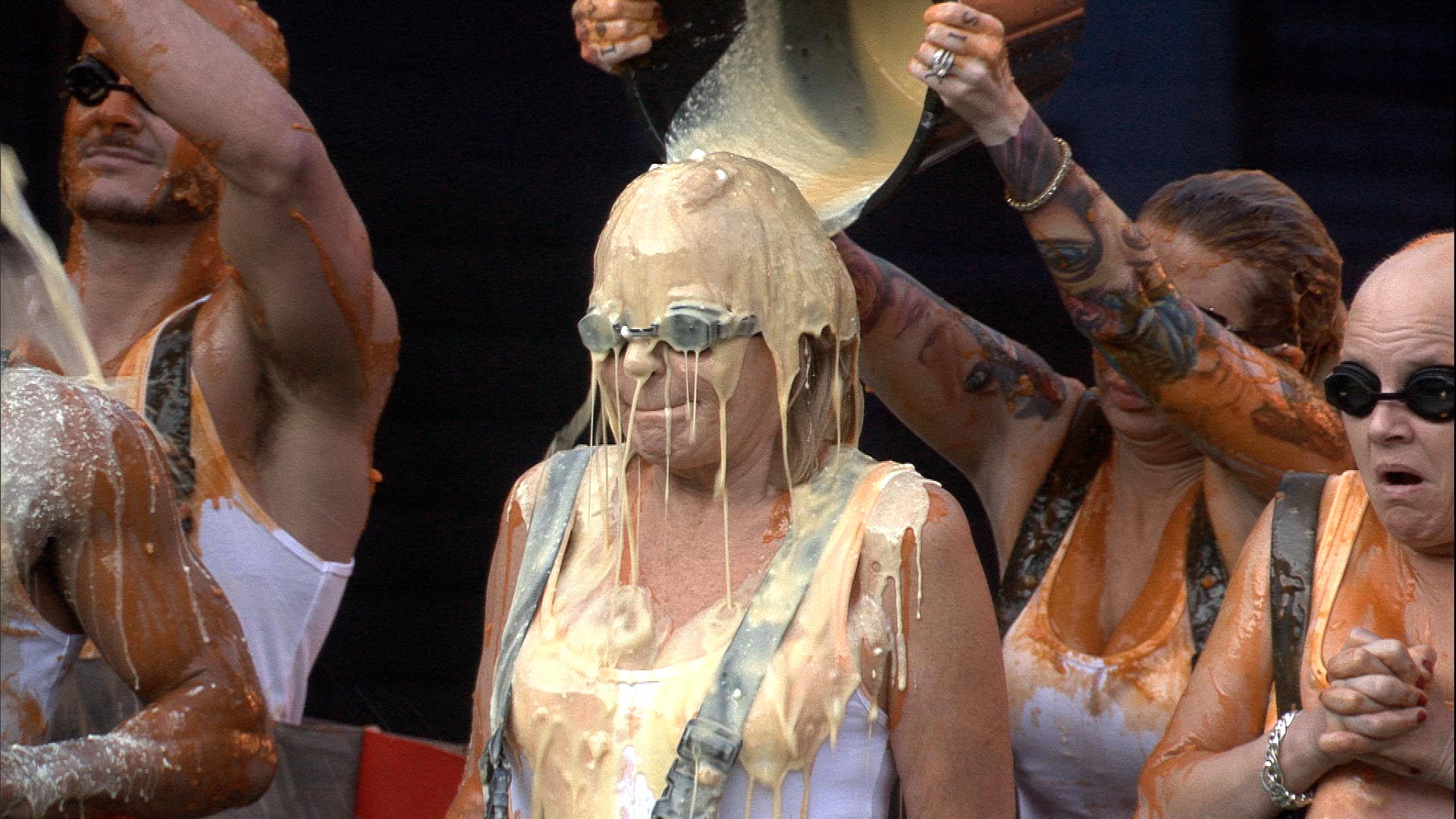 Tonight, housemates take part in the next shopping task.

Gail is in the diary room talking to Big Brother ‘Last night’s nominations, well that was amazing. Bobby was explaining his reasons for annihilating Farrah. When they said face to face nominations I thought this was coming. But wow when it kicked off, step back, go to bed that was my plan.’

Janice tells Farrah in the bathroom that she wants her to be ‘beautiful inside’. Farrah says she wants to be too and Janice tells her she is ‘wonderful’ and tells her to ‘be secure, be strong’

Bobby is talking to Jenna in the bedroom about Farrah ‘Will you look after her for me? I really mean that. I don’t want her to be unhappy. Really I don’t. I wasn’t doing it out of being nasty…I’m sorry I appeared so hard.’

This week’s shopping task begins called ‘On Your Head’. Housemates have to take part in a series of challenges in which they can all earn points. But only two housemates will count towards the task. They have not been told this and have been told it’s the team with the highest points at the end who will win – the public have voted that Team UK will be represented by James, and Team USA will be represented by Farrah.

Chloe-Jasmine and Stevi are told they have to sacrifice any PDAs both verbal and physical and must sleep in separate beds. Chloe-Jasmine is not impressed ‘with the exception of Gail everyone has had to put something material into a box (gets tearful) and this is something so precious to me. This man is one of the reason’s I get up ever.’ Chloe-Jasmine must put her engagement ring in the box to symbolise the sacrifice. Chloe-Jasmine says ‘this is sick’

Team USA are talking tactics. Janice tells them ‘I am going to break Bobby down.’ Farrah tells Austin to make fun of James’ hair a lot. Austin declares that Chloe-Jasmine ‘will be the easiest one to break’. Jenna devises a plan to make sure Chloe-Jasmine must sleep as far away from Stevi as possible.

Austin teases Chloe-Jasmine ‘your new bed looks amazing, nice and small and dark.’ Team UK tell her to ignore him and not to rise.

Janice tells Austin ‘The best thing I ever did raising both my children. The proudest thing I’ve ever done is to raise non homophobic and that’s my biggest pride which is what will happen when you and your partner, your husband have babies. I’ll carry it if you want? You know I can carry it, you just have to get it, turkey baste it. I’ll do it. I will honestly do that.’

When the klaxon sounds the housemates much run to the dancefloor in the garden and bust their best hip hop moves give to them by Big Brother. They have to dance to Fatman Scoop’shit Be Faithful.

Part three of the task the housemates must pour buckets of slop over their opposing team members to win points. Bucket number one is congealed vegetable soup; bucket number two contains rotten cheese, James finds this one a little too much to handle and retches.

Sherrie and Gail discuss the day’s task in the kitchen ‘I think it’s cheese you smell in your hair though, don’t you?’ Gail ‘I wouldn’t know I don’t have any hair.’

James is in the diary room talking to Big Brother ‘F***ing hell fire, I am going to have to wash my hair because it stinks so bad and its making me feel really poorly.’ Big Brother ‘You are free to wash your hair, you’re just not allowed to use shampoo or conditioner.’ James‘That’s not really fair though is it Big Brother?’

Jenna is talking to Scoop and Farrah in the bedroom ‘I had rotten cheese in my vagina…there was like chunks..I swear if I get a yeast infection somebody’s going down. I have never gagged so much in my life, that’s saying a lot.’

Housemates are gathered for the final challenge in today’s shopping task. They must buzz in with an honest answer to the questions given to them.

‘Which housemate is the most boring?’ Jamesbuzzes in ‘My answer is Farrah because, I don’t know what I have done with Farrah apart from argue and a couple of heart to hearts. But as a whole I find her boring.’ Farrah responds with ‘I think I am so awesome, so fun, that no one in this world could be bored of me. And that’s why I think James is wrong.’

Bobby thinks Farrah is the least trustworthy : ‘My answer is Farrah, she seems a little bit preoccupied with herself and I always find as though every time I look over she seems to be whispering and I don’t really trust her simply because of that.’

Janice is named the ‘biggest diva’ by Jenna and ‘most manipulative’ by Natasha.

Farrah gets labelled as the ‘least talented’ by Austin.

Janice takes spite of what Natasha said and so names her as the ‘most two-faced’.

Natasha answers that Farrah is the ‘most vile’ in the house due to the first night when Farrah said she wanted to ‘spit on’ her. Farrah responds with ‘I accept that, I am happy I don’t take s**t from someone off the bat coming in the house and loves to talk s**t or talk about me with Austin, so I am happy I stood up for myself and I would love to spit on someone who treats people like that from their first impression because that is a horrible first impression. Cheers to Natasha because I think she is vile too.’

Natasha also names Farrah as the ‘least popular’ in the house. Farrah ‘I’m happy to be the least popular person in the house because I love that I stand up for what I believe in. I don’t tolerate fake manipulative coward like behaviour from people. So thank you!’

Bobby tells Stevi in the garden that he is in a happy place in his life and he ‘appreciates everything more’.

Jenna tells Janice in the bedroom that Natasha was rolling her eyes every time that Janice was talking in the task. ‘She is so incredibly two faced and she’s got to get called out’.

Natasha is in the bathroom with Austin and James. She tells them she is ‘stressed to f**k.’ and starts to cry, ‘it’s just a stressful environment.’ James and Austin try to reassure her. Natasha says ‘The thing is when you’ve got two girls who are just giving you vibes it’s uncomfortable.’ James tells her she is a ‘fighter’.

Jenna is in the diary room talking to Big Brother ‘I sit back and look and see Natasha giving Janice..rolling her eyes so far back in her head she can see your brain..you know what b***h it is so evident how fake she is. I do not stand for that s**t. I think it’s ugly, I think it’s embarrassing and I think it shows exactly what kind of person she is. You can kind of tell by her sour ass mug..the girl is not cool. She is not a good girl. And to me she is the cancer of the house.’

Chloe-Jasmine gets upset when Natasha is singing a love song in the smoking area. Janice comforts her.

Farrahtells James that ‘sweet talking bulls**t doesn’t work’ with her after he tells her in the bedroom that he doesn’t hate her. Scoop tells James and Farrah ‘if I didn’t know any better I would swear you two like each other. Now I’m starting to believe this s**t.’

Jennaand Natasha are in the kitchen trying to build bridges. Jenna ‘The only people that can p**s me off are people I care about. And I truly care about you. When you stood up and you nominated me and what you said I was just like..you made me feel like crap and I don’t think I deserve that. I mean we did have an exchange but we were on a different level than you doing that.’

Austin teases James about him changing beds, James ‘You would not be able to sleep’.

Stevi upsets Chloe-Jasmine in the bedroom as he states he could get used to sleeping in bed with Bobby.

Natasha is in the Diary Room talking to Big Brother ‘We definitely have to win this task 100%. I mean I thought I was competitive but they are competitive on a different scale. Like if we win something or we do well we can be like ‘woo’. When they win it’s like ‘Yeah!!’..it’s so OTT. I don’t mind making a fool of myself, getting covered in things…you just know the s**ts going to hit the fan any minute.’