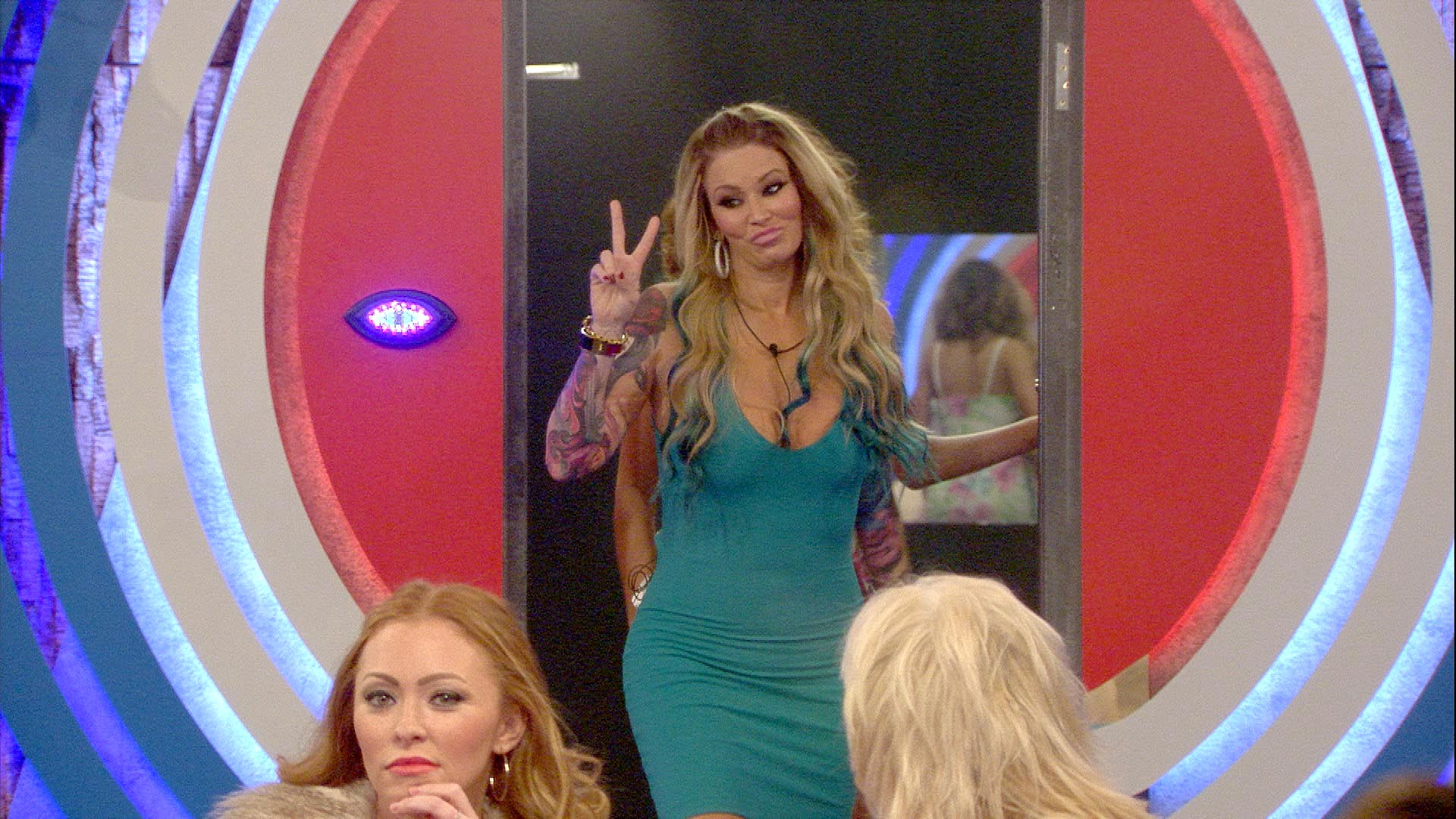 Tonight’s programme will feature highlights from the past 24 hours in the house.  The final nominations are given by Jenna and Farrah. Its Bobby’s birthday and tensions rise as Jenna and Farrah re-enter the house and are informed the joke has been on them.

So far Austin, Natasha, Bobby and James have been nominated by Farrah and Jenna making them immune from eviction.

Janice sings Happy Birthday to Bobby in the Diary Room in the style of Marilyn Monroe.

Farrah and Jennamare having a secret fresh air break in the garden. Jenna ‘I like the idea of walking back in, just the idea of that, makes me freakin’ really excited. Scoop is going to be so happy..Bobby’s going to want to freakin’ jump off a cliff. (James) Will just sit there with that little smug smile on his face and try to charm me and stare at you oddly. And Natasha is going to sit across from us with that weird pie face.’ Farrah ‘Sherrie is the alcoholic witch.’

Stevi is in the tower ‘It’s lovely up here so nice. A little bit of Stevi time. Just here and its really nice. I love this.’

Chloe-Jasmine is in the diary room ‘I am just feeling a little bit lost. It’s really weird usually I am jumping about and cracking jokes and I don’t know where that person has gone (gets teary). I’m just trying to do a good job. And it is a huge thing to go on something with your loved one it’s a big risk because it can go either way. I am just so worried about Steven…I have tried discussing it with him but he wants to be alone at the moment which I totally respect but I feel a little bit redundant as a girlfriend. I’m feeling completely alone.’

Housemates are told that they will have a chance to get themselves nominated by Jenna and Farrah as they will be given a live feed to the Tower. Housemates must decide which of them will go to the Tower and make their way there.

Jenna and Farrah are discussing the upcoming eviction, Jenna ‘If we get our way and four people go on Tuesday I am almost 100% sure we are making it to the finals. I hope to God this sticks a knife in them. To be honest the way I felt when I saw those cheering when I walked out…It really hurt my feelings. I want them to suffer because of this.’

Bobby is chilling in the Tower, Stevi goes up to join him hoping to get a nomination ‘How are ya?..It’s beautiful that you’re in here and your celebrating it (birthday).’ Bobby ‘I’m relaxed because the ugly sisters have gone’. Stevi ‘Yeah Farrah and Jenna, I’m glad for you really to be honest with you Bob…They’re gone and we’re here.’

Bobby is then joined by Sherrie. Bobby ‘I have had a few bumps along the way. With Farrah, maybe I was a little harsh.’ Sherrie ‘You only said what everyone was thinking and that’s the difference. You know she’s rude, she talks behind people’s backs and the one thing I can’t stand if you can’t say something to somebody’s face then don’t say it at all…she is a dreadful human being…when they were here I really wanted to go up them and say to her but I thought you know what you’re not worth.’

Chloe-Jasmine has taken Stevi aside ‘Is everything ok?..I don’t understand why you would dodge my hugs. You literally just did just then…I felt really lonely, because we are lonely in here.’

Janice and Sherrieplay up to the camera’s with Janice using their make-up and eyelashes and using it to bait them on camera.

Jenna and Farrah are discussing their final nomination Jenna ‘I want Janice to stay the f**k in. I want Sherrie out because she is more of a nuisance. I want to have it f***ing out with Janice. And I think you do too. She had some f***in gnarly ‘f**k you’ things to say…and then I am going to snatch up all her f***ing make up and dump it down the toilet.’

Housemates are gathered on the sofas for Jenna and Farrah’s arrival back in the house. They have been told to act surprised. Jenna and Farrah they what they have seen has been ‘insightful’.

Big Brother announces to the house what Farrah and Jenna have been doing over the last two days. They are told that they have chosen four of them to face the public vote. They have to stand up and nominate those people to their faces. Farrah ‘This is so exciting, this is ground-breaking.’

They first nominate Austin for being a ‘turncoat’. Second nomination was Natasha, Jenna ‘partly because we’ve had a few little rows and we came to terms. So when we watched all your conversations after we left we were pretty shocked.’ Third is Bobby, Farrahdescribes Bobby as the ‘sanction of evil’. The fourth is James, Jenna ‘within seconds of me leaving you called me a b**h and that you didn’t really like me. That you walked on eggshells around me.’ They have to make their final nomination. Jenna ‘It was really between two people, but our last nomination is Sherrie…from my point of view I really really like you, I felt like I was really cool with you and you said really mean mean things about me.

Jennaand Farrah look very happy with themselves about their nominations. Big Brother then tells them that the Housemates they have nominated are in fact immune. All those nominated jump up and cheer. Jenna storms off.

The twist is revealed to Farrah and Jenna. Jenna ‘So that is why you guys were mean? You don’t have to laugh at me, you hurt my feelings.’

Housemates that will face eviction are Chloe-Jasmine and Stevi, Janice, Scoop and Gail.

Tensions begin to rise, Jenna ‘Do you understand how it feels…when people I liked a lot just turn on you within a second.’ Natasha ‘Hold on a minute Jenna. I stood up to hug you and you blanked me.’ Jenna ‘I do not want to start with you, do you understand…because I just don’t like you, you are fake.’ Natasha ‘Oh do you not?..well that’s just great. Lovely…Do you think I give a c**p what you say Jenna…I do when you are attacking me and my family.’ Austin butts in ‘Farrah you can sit down no one wants to talk to you…no one is talking to you. Sit the f**k down. This whole house cares about her (Jenna). Do you know how the house felt when they heard you were coming back? Petrified of you, because you are a nasty f***ing b***h!..Jenna, you need to separate yourself from her really. We all really care about you and like you. This one (Farrah) showed her true colours.’

Bobby‘Do you know why people take a dislike to you Farrah? Because it saves f***ing time.’

Austin ‘Five minutes and you are stirring up sh*t. What is your f***ing problem?’ Farrah ‘It’s a game.’

Natasha and Jenna are talking on the sofa. Natasha ‘What did I say about you when you walked out?’ Jenna ‘Oh it was complete f***ery..I mean you were just saying you didn’t like me.’ Natasha ‘The wine I thought is a valid point because Austin put those glasses out for his brother’ toast..no you didn’t fill them up…you filled up your glasses up first…we all saw what you did.’ Farrah ‘You’re a liar,shut up.’ Natasha ‘I am not a liar..what am I lying about?’ Farrah ‘I don’t know. You talk about wine a lot maybe you have an issue?’ Natasha ‘So this goes from me having a moral about the glasses being filled up?…Hi, I’m Natasha and I’m a liar. I am not two-faced.’ Farrah ‘Yes you are.’ Natasha ‘I think everyone is this house has the right to an opinion about you..oh right shut the f**k up.’

Austin goes to talk to Jenna ‘Wait a second. I was really riled up at that because I said in the diary room because I said me and her have been so cool this entire time..(Farrah butts in) Then go somewhere else then. No one is interacting with you…you are f***ing whack!’

Jenna is trying to talk it out with Janice and Scoop and Farrah. Jenna ‘It was a really f**ked up thing Janice and I am so disappointed I thought I was your friend and I thought you respected me.’

Bobby celebrates his birthday with the whole house and gets emotional when making a toast to his family.

Scoop is talking to Farrah and Jenna in the bedroom about what can be done so that everyone can get on. Farrah says ‘I would really like that. I cannot change anyone’s screwed up outlook on life. So there is nothing I can do; only they can change.’

Farrah and Jenna are in the diary room and Big Brother asks them to describe the mood in the house. Jenna ‘a faeces hurricane. It’s awful. It’s alienated us even more. Everyone feels awkward but they don’t know how to apologise. I think that a lot of people are going to kiss ass to try and smooth things over. I’m a grudge holder and I feel for the first time like people are straight up lying to me like this is a full bulls***ting operation.’