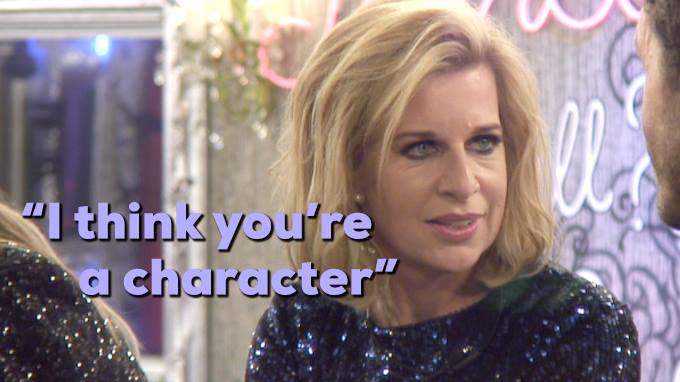 The Housemates awake and realise that it’s not a dream and they really are in the Celebrity Big Brother House and reality starts to set in.

Michelle talks to Big Brother in the Diary Room and says that they are an interesting lot and that she in enjoying getting to know Katie. She does say she is enjoying the side Katie is showing but isn’t sure if she ‘buys’ it and admits she is not a fan of Katie’s online persona.

Kavana and Chloe talk about the dynamics in the house and Chloe says that Americans are louder than English people.

Ken is checking out the bathroom and isn’t happy with the lack of shelves in the shower as he needs to ‘rub his nuts with perfume and oil.’ Keith offers to come in and do it for him.

Perez asks Kavana if he knows Mel B well as he is a huge Spice Girls fan and admits he went to see Spice World dressed as Mel B.

Chloe talks to Big Brother about being nominated and says that it’s a ‘pie in the face’. Big Brother asks her who it should have been instead of her and she answers – Alicia. She admits that it’s just because she hasn’t spoken to her very much.

Nadia grills Katie on her controversial opinion on fat people. Katie says she does think that Nadia is fat and when pushed to explain her criteria, she says, ‘Gemma Collins’. Katie then repeats her opinion that it’s better to be honest and that it’s a good thing to say what you mean.

Alexander has a little sing-a-long in the garden on his own.

Jeremy tells the other Housemates that he once had ballet aspirations but his arches fell and ruined his chances.

Michelle tackles Perez in the kitchen and tells him that she used to be a big supporter of his until he took a dark turn, she further tells him that he got big-headed and stopped answering her emails. Perez admits that he is a ‘work in progress’.

Nadia runs out of the bathroom when confronted by some neon yellow wee and Jeremy flushes it for her but does say that he prefers solutions to complaining.

Katie talks to Big Brother in the Diary Room – where her curse of kindness is lifted and she can speak her mind. She is asked her real opinions of the other Housemates. She describes them as self-obsessed, delusional fools. Big Brother further asks her who she deems as the least attractive in the house. She says:

· Patsy – She calls her a manic, nervous goon.

· Perez – She says he needs to work on toning his body up and toning his voice down.

· Ken – She says he has developed a portly stature due to his age.

Big Brother tells her that she needs to do a good deed and give one of the above Housemates a foot massage to which she shouts, ‘P*ss off!’ She leaves the Diary Room and proceeds to massage Perez’s feet, how can Perez resist?

Katie then returns to the Diary Room and is told that the kindness curse is lifted and she can now be herself in the house. She is asked how her behaviour will change and she answers, ‘If I want to go, I’ll go.’ She is also told that the curse must remain a secret or else there will be terrible consequences.

Michelle asks Calum about his relationship with Lindsey Lohan and if it was before ‘the lesbian madness’. He says before.

Ken enjoys a solo session in the hot tub.

The girls talk about love and relationships in the bedroom. Michelle tells them she has been happily married for seventeen years and Alicia admits she has never had a long term relationship and that she’s a bit of a ‘perv’. Cami Li talks through the timeline of her relationship with Kirk Norcross and is asked if he cheated on her. She categorically replies, ‘If he cheated, I would be in jail.’

Alexander, Ken and Jeremy wax philosophical in the garden and Jeremy states that, ‘We are all hurtling towards death.’

Katie tells the girls that her husband has ‘endurance skills’ as he has been married to her for eight years and Pasty accuses her of having tears in her eyes while she talks about him.

Perez asks Calum if he should drink as his dad was an alcoholic. Calum explains that he is not an alcoholic and that he drank to get over losing his father. Calum states that his father didn’t just get wasted he drank from eight in the morning to eight at night every day for forty years.

Jeremy asks Michelle if he should shave his beard off. She tells him she doesn’t know what he looks like without it but quite likes the ‘mountain man’ thing he has going on.

Cami-Li admits to some of the group in the hot-tub that she has a very intimate tattoo. Perez is treated to a view down her bikini bottoms.

Michelle tells Nadia that the experience of being in Celebrity Big Brother is ‘saving’ Jeremy.

Chloe demonstrates her amazing ability to move each of her boobs independently without touching them.

Nadia goes to the Diary Room and is asked how she has found her first full day in the house. She admits that she has loved it and she has taken on the aunty role and says, ‘The full family cast is here.’ She says that Cami-Li is ‘such a sweet girl’.

Cami-Li teases Calum about his trainers and calls them, ‘mass community’. Calum says he is a leader and not a follower and accuses her of talking sh*t. Cami-Li retorts, ‘I talk sh*t if I like you, if I don’t you get hit.’

Alicia goes to the Diary Room and says that the house is in a lull before the storm and that groups are forming but some might have made a mistake. She explains that Cami-Li and Chloe are both after Calum and they are going to have a bust up.

Cami-Li goes to Calum’s bed to make up with him after their tiff and he tells her, ‘we’re all good.’ After sharing some ‘friendly gestures’ as Calum calls them, Cami-Li calls him a sexpot.