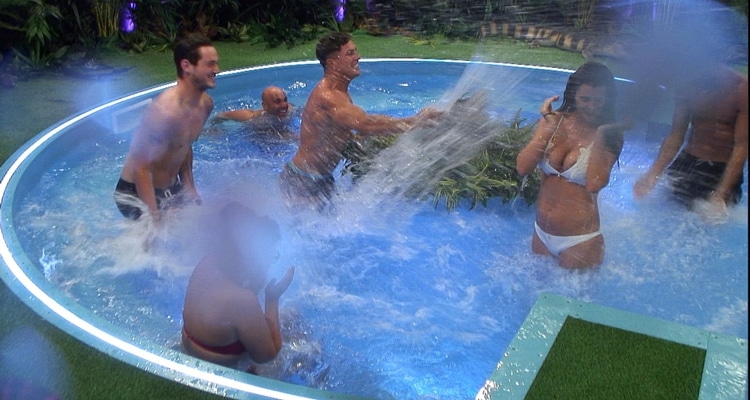 Since EMMA WILLIS announced on Friday night that JADE would kick off a round of ‘Tag Nominations,’ the housemates have one by one been picked to choose the next person to face eviction this week. Yesterday, DANNY completed the final round of ‘Tag Nominations’ by nominating NICK. He joins CRISTIAN, DANNY, HARRY, JACK, JOEL, SAM and SIMON who all face eviction via the public vote on Friday 28 June, during the LIVE 9.00pm Channel 5 programme. The only housemate who did not receive a nomination was CHLOE, together with the Time Warp Housemates, MARC, BRIAN, HELEN and NIKKI, who are immune from this week’s eviction.

The following reasons were given for each nomination:

JADE nominated CRISTIAN because “the way you’ve been has come across fake to me.”
CRISTIAN nominated SAM because “she’s taking sides and she needs to open her eyes more.”
SAM nominated HARRY because “she’s the only person who’s made me feel small.”
HARRY nominated SIMON because “I don’t like it when he says ‘showbiz’.”
SIMON nominated JACK because “I was ill last week and he asked me to help with the cleaning.”
JACK nominated JOEL because “when the new housemates came in, he jumped on the bandwagon.”
JOEL nominated DANNY because “Danny can be quite indecisive and as a house I don’t think that is beneficial… I prefer to know where people stand.”
DANNY nominates NICK because “as a mate you should listen to my advice. Your relationship with Harry has got serious too quick.”

Voting lines open during tonight’s Big Brother (Tuesday 23 June) and will close during the LIVE 9.00pm Channel 5 programme on Friday 28 June, during which time, the ninth evictee will be greeted by their friends, family and of course, EMMA WILLIS for their first post-Big Brother TV interview.

Viewers can find all the ways to VOTE TO EVICT by visiting http://bigbrother.channel5.com/voting

This is the first time Jack has faced the public vote after having used his ‘Timebomb’ passes to save himself twice (in weeks three and four) and this is the first week that Nick faces eviction after the twist in week three meant that Nick no longer faced eviction.

***To see the final two housemates nominate each other in front of the group, tune into Big Brother tonight at 10.00pm on Channel 5 ***