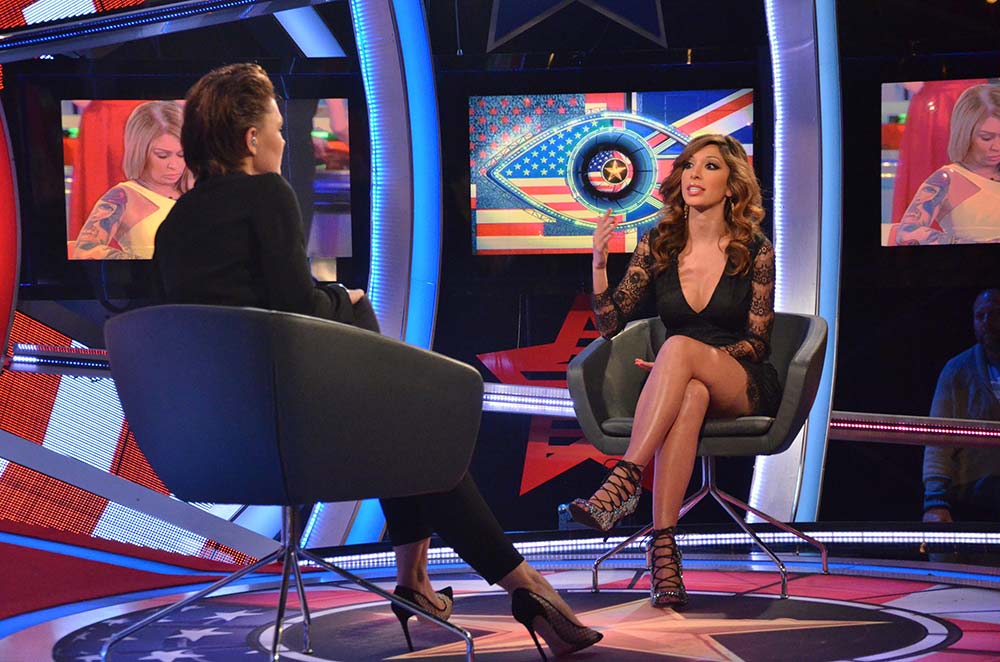 This week, viewers were voting to save four Housemates from the firing line.  The rest battled it out in an explosive eviction showdown, which saw Emma Willis enter the Celebrity Big Brother House.

Emma revealed the four Housemates which the viewers saved from the ‘eviction showdown’.  They were Austin, James, Natasha and Stevi & Chloe-Jasmine.  Emma asked these four Housemates to each stand behind a plinth as they were told that the fate of Bobby, Farrah, Jenna, Sherrie and Stevie & Chloe-Jasmine was in their hands.  They each had to save one Housemate, leaving the last Housemate’s fate to be inevitable as they faced eviction from the Celebrity Big Brother House.

Farrah Abraham was the fifth Housemate to be evicted from the Celebrity Big Brother House.  When she re-joined Emma on stage, Emma asked Farrah if she was happy to be out: “I’m happy it’s for real this time…I miss my life, I miss real life”.  When asked if Farrah thought she could be leaving tonight due to the ‘eviction showdown’: “I thought there was a possibility just because getting to know the other Housemates, I felt they really wanted me out of there at times.  I didn’t care either way so I’m pleased”.

On Austin’s decision: “I think that he was very stressed.  Out of the US Housemates I know that Jenna and I were very close to him”.  On her experience in the House: “I’m not fake and I think it’s very hard for a real person to win this…Fake b*&lsh&t, I’m not about that.  I don’t buy into a lot of in the house”.  Emma asked Farrah about her defensive nature in the House: “I feel like at the time if I was antagonised….then I showed my emotions…I stayed true…I got to have some great friendships with Jenna and Scoop.  They can have the lovely Farrah if they want to…I embrace it”.

On coming back to the House since the Secret Room: “I really felt like I don’t agree with how the house is being led in this game…I am bored of all the people living in the house”.  On Jenna: “She’s Jenna…she’s part of Jerrah.  She is an amazing person and she handles a lot of stress better than I do….Jenna would say I stand up for you and you stand up for me”.  On James, Farrah said: “James doesn’t really show his true self in the House, he’s on his best behaviour”.  Emma asked Farrahwho she wanted to win: “I really think just Jenna at this point.  The true winning people have been evicted and voted out of the house already”.

Celebrity Big Brother returns tomorrow at 10:30pm on Channel 5.  Join Emma on Tuesday at 9pm for a double eviction.