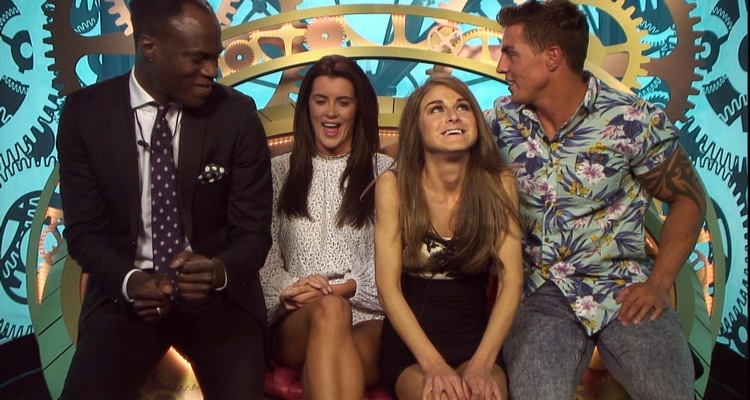 Mark is the Housemate that the Big Brother viewers have voted out of the Big Brother House in this weeks fake eviction. Mark will join ex Big Brother legends in a secret lair where they will then spend two days before sensationally rejoining the House LIVE at 9pm on Sunday.

On the announcement of Marks eviction the Housemates said how entertaining he had been and Simon promptly burst into tears and declared how much he would miss him.

Mark left the house to meet Emma who asked how it felt to be out, he said “kinda good, I miss my friends, I was just in there to make entertainment.” She continued to ask why he thought the public had voted for him to which he said “I think I was just in there to have fun and wreck it up, and to tell you the truth I made some friends.”

Emma then went on to deliver the bombshell that this was not a real eviction and that the public had been voting for him to enter a secret bunker. Mark reacted by cheering and laughing and thanked the crowd as he made his way into the secret bunker.

Brian Belo was the first legend Housemate announced to enter the bunker. Before he went in he spoke to Emma, who asked if he was ok and how he was feeling. “It feels absolutely massive” Emma then went on to reveal he was going into the bunker with Mark, Brian was happy and commented, “He has got high energy and I am going to bounce off him and we are going to put a rocket up the houses a**e!”

Reigning champion Helen Wood came on to the stage to a mixed reaction and she spoke to Emma. Emma asked Brian why he was scared of Helen and he said she looked like he might nut him but Helen said they would be friends and was planning on getting on with everyone.

Helen and Brian went into the bunker to meet Mark and they were excited about the prospect of secretly watching the Housemates.

Finally the last Big Brother Legend to be announced was old favourite Nikki Grahame who was welcomed with cheers. Nikki said to Emma “I am so excited I have had nervous diarrhea all day!” Emma said “You were much loved for how high maintenance you were will you be the same this time around?” “I like to think I have changed but my friends say I haven’t, I cant wait to ask them all ‘who are they’!” Emma asked her “We remember you found love last time, are you hoping your fixation with Cristian might work?” Nikki replied “He is gorgoeus I could be his Caroline Flack.”

As they settled into the bunker Big Brother called the phone and spoke to Mark to tell him that as Time Warp Housemates they are responsible for observing the Housemates and will have sole control of who will leave the house. Mark replied “I f****ing love you”

The show ended with the Big Brother legends and Mark in the bunker discussing the old Housemates and who they wanted to evict.