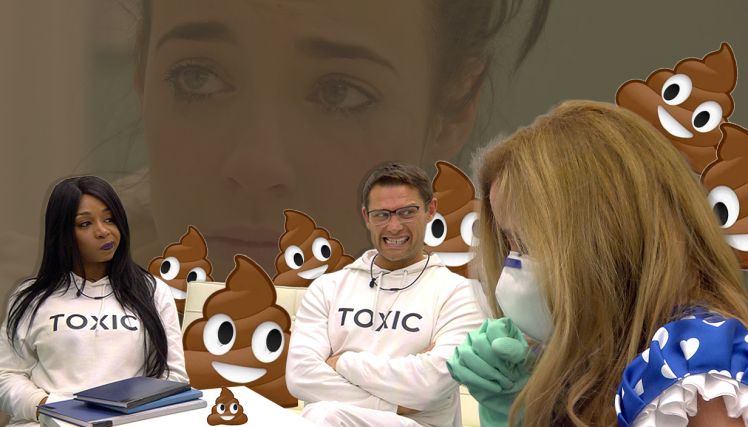 This week in the Big Brother house we have witnessed one of the worst tasks in the history of the show. Self proclaimed psychologist and life coach Gillian McKeith has been marching around the house accusing all the housemates of being toxic – to varying degrees. Is it possible that BB can plumb the depths any further with this pointless “task”? Darren Day had it about right when he just gave forth an exasperated outburst claiming he’d had “enough of this b*ll**ks”. The celebs signed up for BB – not to have their bodily functions examined in the most minute of detail. For Channel 5 to actually broadcast a pile of poo on TV and claim that someone can actually derive so much information from it is plainly ludicrous. Some medical information of course can be extracted from studying bowel movements but not the level of old codswallop that the barking mad Gillian was coming out with. The housemates are clearly not playing ball any more and are ruling the roost in this show. They are ignoring the bits they don’t want to take part in and as Gemma and Danniella have shown – if they don’t get their way they will just break out of the compound repeatedly until they do. Don’t worry girls you won’t get punished. With so many walk outs already BB doesn’t dare lose any more housemates.

This edition of Celeb BB started on a downer with the unfair treatment of Winston and has just gone nowhere in the following few weeks. Can anyone actually remember one of the tasks or opportunities that housemates have had to shine? It has literally all been about caging the celebs, goading and prodding them until they react in an aggressive manner. Like all of us at some point we would hit that breaking point and explode with frustrated anger and say things that perhaps we didn’t mean. Some of the more savvy housemates have realised what has been happening and it seems are just trying to blend into the background and grind out their time in the house. Darren and John seem very keen to just keep their noses clean, avoid as much stress and arguments as possible and smile serenely as the less mature members of the house cause a ruckus depending on their own agendas. The tantrums of Tiffany in recent days have been plainly laughable. Does she not realise that she isn’t going to win an Oscar any time soon and her outbursts, firstly at a stunned Scotty and then in reaction to her nomination have contained more ham acting than the hammiest of hammy piggeries. The Stephanie and Jeremy relationship is just getting boring now. Jeremy is to be fair led primarily by the lunch in his lunchbox and is just waiting for a chance to unpack his chipolata in her direction. Stephanie is certainly one mixed up girl. Her treatment of her “boyfriend” Sam Reece has been appalling and will I’m sure come back to bite her not only in the coming weeks but for a very long time to come. She can’t say that’s the situation is of Big Brothers making as she seems to be implying. If you don’t say these things Steph they can’t air them. Are you really this naive? Short term you will gain from magazine deals but at what cost to your self respect?

My favourite to win as the show started David Gest must be breathing a huge sigh of relief as he relaxes in the outside world. His “illness” was fortunate and well timed in the extreme and I imagine was an excellent excuse to escape the madness that is this years Big Brother.

But where do the makers of Big Brother go from here? To be honest I’d like to say the only way is up but I do fear that the over reliance on just goading and angering the housemates to provide “entertainment” all the time and the laziness showed with the total lack of any credible tasks could spell the death knell for the show quicker than we all might think. Personally I’d like to think that the genre has a little longer in its lungs to entertain and hopefully once more excite and intrigue our interest but there must be a lot of changes made to both the style of the show and the direction that it is heading. There must be alterations immediately – the viewing public are not stupid and to rely on just arguments to keep a show like BB afloat will not work year after year. A fresh re-think is needed now – before it is too late.

Tonight we will see one of Jeremy, Stephanie or Tiffany evicted and whilst I suspect it will be Jeremy who will struggle to raise enough support to keep his place in the house I really don’t care who leaves. Now we have been watching for over three weeks of the show and after enduring endless hours of footage I still haven’t warmed to any of the housemates. Partly this is their fault – there is just a lack of likeable characters this season but there is also a responsibility of the makers of the show to – on occasion – display the housemates in a positive light and they have not allowed this to happen. I suspect that around three days after the end of this particular CBB we will struggle to remember any of the so called stars.