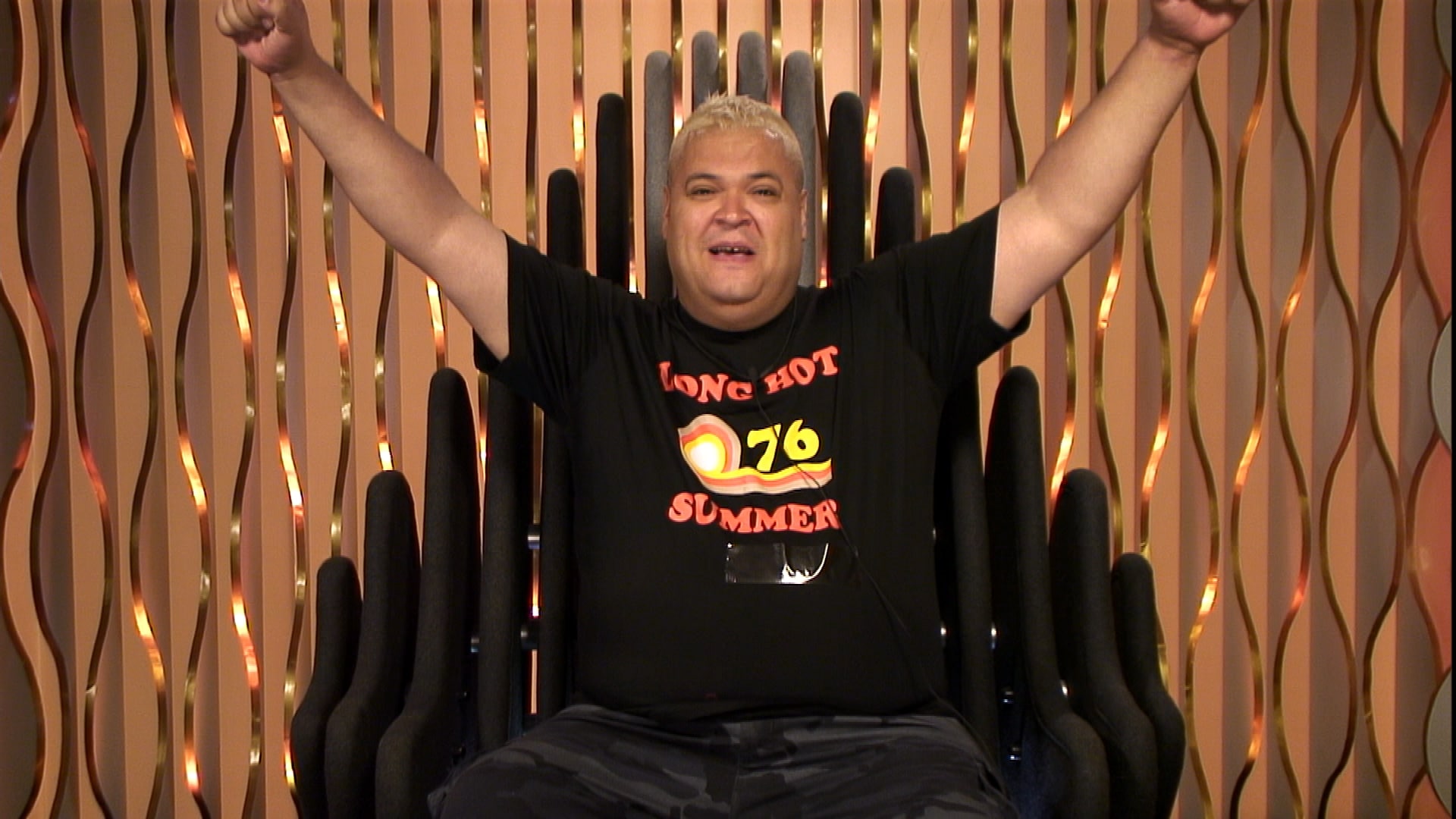 On tonight’s show: The Secret Boss task comes to an end, facts about some of the housemates are revealed and Saira disagrees with some of her housemates.

In the bathroom, Lewis reveals to Samantha how he feels about Marnie; “I think she’s a nice girl, she’s fit, I wouldn’t want Steve (Bear) to get in there first, I don’t like to rush things. He’s so confident!”

In the garden, Lewis tells Marnie; “From TOWIE we don’t really get that much. It does give you the opportunity to do other things, now I’m onto the other thing I can stop being this silly lad and hurting girlfriends, and now start thinking about getting a house and a dog.” She agrees, and he also tells her that she’s pretty.

Biggins is called to the diary room as part of the Secret Boss task, and asked to make his next nomination by serenading a housemate who he would like to nominate.

Saira is talking to Marnie about how she’s already worked out and helped tidied the house.

Biggins serenades Heavy D; this means he is now immune from the first eviction.

In the bathroom, Saira and Bear are talking about each other’s personalities. Saira tells him; “I find you interesting, you are a very smart capable person and I identify with you. All my life I’ve been assertive and aggressive and it’s held me back in some areas of my life.” Bear says; “Don’t regret nothing. You’ll never see me have a fight or start being aggressive or punching anyone. I’ll never start anything.”

In the garden, Marnie reveals to Bear that she thinks Saira ‘doesn’t like her’.

In the diary room, Saira is talking to Big Brother about Marnie; “I find she’s a different person with alcohol. I’m trying to make polite conversation; I got the vibe ‘back off’. I’m not going to be in Marnie’s circle. I get the vibe Bear doesn’t like me. He’s a smart guy, like Marnie, their worlds are very different to my world. I will modify my own behaviour so I don’t push people’s buttons the wrong way.”.

Biggins is called to the diary room, housemates watch on from the sofas. Big Bother reveals the details of the Secret Boss task, they all laugh

A task begins in the garden, where interesting facts are revealed about some of the housemates. Housemates must try and guess which fact relates to which housemate by standing in the phone box that they think holds the correct answer. Those who guess incorrectly will be gunged.

The first question is which housemate posed naked with an octopus for a photo shoot. The majority of the housemates picked Biggins and therefore were not gunged. He reveals that this was for a campaign to save fish.

The next revelation is which housemate betrayed their friend by sleeping with their cousin, the majority believe it’s Bear, and therefore not gunged as they were right.

The next question is which housemate froze their dog’s sperm, Aubrey announces it was her.

The final question is which housemate once gave their spouse a hall pass to sleep with other people. The correct answer was Saira, she reveals; “I was on Loose Women, we were talking about sex. I said ‘I’ve even said to my husband ‘if you want it elsewhere just go for it’ O M G! But I would like to tell everybody that I am now having good sex!”.

In the diary room, Aubrey and Frankie are talking about Bear. Aubrey says; “I want to see more from him! I just love it when hot guys are interesting and have depth.” Frankie adds; “I think he swings both ways! I get both way vibes from him!”

In the kitchen, Saira announces; “Honesty is my downfall. I’m too honest. I say it as it is.” Heavy D says she must be doing something right as she has a good career. He reveals to her that he finds her ‘patronising’; “It’s how you say it! You haven’t got much tact.”

Lewis adds to Saira that it’s ‘worth being aware’ of what people think.

Bear tells Saira that he thinks she is trying to make him look ‘bad’, she disagrees.

Saira continues; “I’m an individual and there’s four of you staring at me, things are being taken out of context. I’m trying to get to know people in the house.”

Saira cries in the diary room; “I’m so out of my comfort zone with some of these people. I did not think Big Brother would make me crack after three days. I’m trying to get to know people and no one has gotten to know me. I really do not like Bear.”

In the bedroom, Heavy D comes to clear the air with Saira; “I haven’t got a problem with you, the conversation got carried away.” She replies ‘it’s fine’

For passing the task, housemates are rewarded with a luxury hamper

In the bedroom, Marnie comes to speak Saira; “It was blown massively out of proportion! We are still trying to get to know each other. I get mixed signals from you, not in a bad way.” Saira replies; “But I don’t know what you think of me…” Marnie continues; “You are a lovely person and I don’t ever want to disrespect you!” Saira confirms she will not change who she is

Saira adds, “I am upset. I find when you have a bit of drink you are a different person.” Marnie replies; “I was trying to be sympathetic and you’ve just turned it around and thrown it back in my face!”

In the garden, Saira, Biggins, James and Grant are talking

In the dairy room, Renee is talking about Saira; “I think she acted like a child! She’s an intelligent woman and she’s having an argument with guys over dumb sh*t! I think she didn’t like what she heard…”

In the smoking area, some of the housemates are playing truth or dare. Marnie is dared to go over to Saira to apologise and show her boobs

Marnie begins her dare. She apologies to Saira and asks her if she’s jealous of her boobs. Marnie then pulls down her top and re-joins some of the housemates in the smoking area

James tells Marnie that it was ‘unnecessary’. Saira says; “It doesn’t bother me now!”