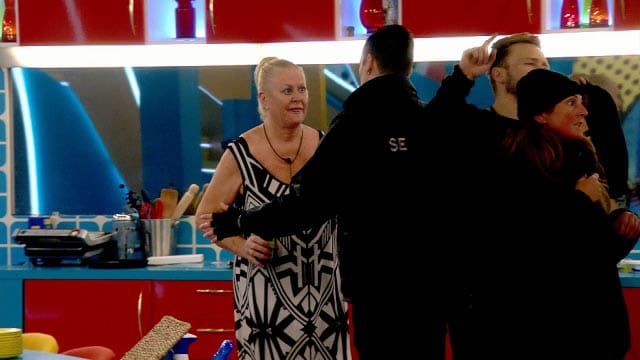 Security had to enter the Celebrity Big Brother house last night in an attempt to break up a huge argument between the housemates.

In the bedroom, Stacy, Jessica and Chloe are talking about Kim’s problem with Nicola. Stacy says that Kim’s issues “seemed to come out of nowhere.” Jessica tells her that people with issues on the outside, might take it out on other people. Stacy says that she has been through tough times but wouldn’t put it on others. Jessica says that she has also been through hard times. They begin to argue about whose life has been tougher and Big Brother calls Stacy to the Diary Room. Jessica is crying in the toilet.

Kim tells Nicola that she was threatened when Kim can into the house. Stacy tells Kim that things are “cool” so doesn’t need to go over things. “You’re making things worse,” Chloe tells Kim. Kim continues to talk over Nicola.

In the Diary Room, Kim tells Big Brother that Nicola has a “hold” on the Housemates. “The mafia won’t break me down,” she warns.

Some of the Housemates are getting ready for bed. Calum says goodnight to Kim and from her bed, Bianca tells him not to be a “kiss arse.” Kim says it’s been “delightful, all the f**king people I’m living with here.”  Kim tells “those girls” her not to start, “I’ll cross you so badly you’ll regret it for the rest of your life.”

Nicola enters the bedroom and tells Kim not to “come” for Bianca. “Mother bunny,” Kim quips.  Kim adds that they won’t get the better of her. “I don’t’ want to, I feel sorry for you.”

Nicola goes into the Diary Room and tells Big Brother she would like to go home.

Kim says that Nicola “a horrible girl” who is leading the house.  Jamie repeats: “How is she horrible, you’re over dramatic.”

Jamie gets out of bed and follows Kim into the living area shouting: “Who the f**k are you talking to?” adding: “You’re a disgrace, you are nasty, you are vile,” as Spencer and Stacy try to calm him down.

Security enters the house and separates the group. Kim tells Housemates they are “a bunch of chinless wonders.” Jamie tells Kim she is a “bully” who has come in the house and “picked on young girls.” Jamie is taken into the bedroom. Security lead Kim towards the stairs as she shouts to Jamie: “You adulterer, that two-timed your wife and she’s got three kids. These people, they put me through hell.”