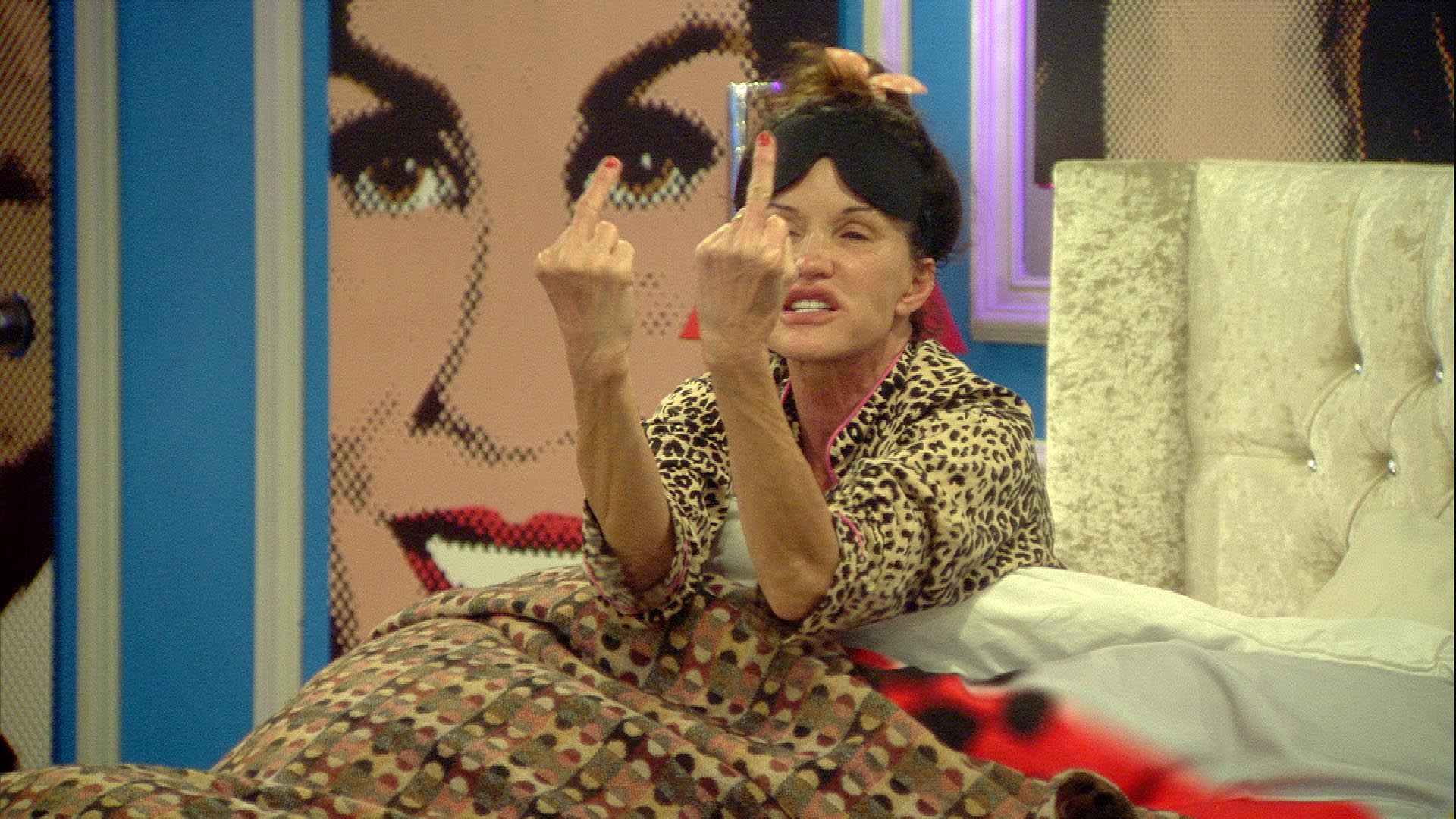 On tonight’s programme, tensions rise after the Housemates watch each other choose their final nominations. The housemates facing eviction tomorrow night (Tuesday 22 September) are JANICE, BOBBY, JENNA and AUSTIN.  Austin and Jenna are shocked to discover that they have been nominated by their friend, James, leading to a big row breaking out between Austin and the rest of the Housemates.

Austin is trying to build bridges with James in the bedroom and shares with him what he said about him in the Diary Room: “I just said you drank the coolade and now you are under Janice’s control but I said that to you anyway, so we cool?” Austin and James hug it out.

Bobby passes on his advice to Chloe-Jasmine about Janice: “in my view she is a player, she is a professional at this, she is brilliant at this, she is a nice lady…but don’t hand everything on Janice.” He continues to express his concern: “Janice will leave, she will go back to America and she won’t be the person that she is in here and the person that will be is that man over there who loves you… she is not the real life friend you think you have in her.” However Chloe-Jasmine disagrees, “since the day she has been in here, she has helped me, and for that I cannot repay that debt, like regardless of what happens I cannot thank her enough.” Stevi joins them and comments that Chloe-Jasmine doesn’t always come to him first.

Janice is counselling Chloe-Jasmine and Stevi in the garden, “my job here is to protect Chloe-Jasmine’s sobriety, that’s all, not to cause strife and you’re feeling abandoned and left out because she comes to me, only for questions about the drink.” Stevi feels that Chloe-Jasmine should be able to come to him about her problems as well.

Big Brother gathers the Housemates and reveals the Housemates’ nominations from this afternoon nomination on the plasma screen. There are some controversial nominations, Natasha nominates Jenna because she doesn’t feel that she is 100% genuine and James also nominates Jenna because he avoids choosing Janice for Chloe-Jasmine. Bobby is also nominated by Sherrie because she didn’t like his send up of Jenna, “I feel that, that humour was too cruel and too much now.  The days have gone where you can do that.” James nominates Austin, “the way he goes off and how he is treating people is very hard for me because you know I have to make the right decision and as much as I love him you know he is wrong and how he is behaving is wrong, it makes it very hard for me because he is my best friend in here.”

Jenna and Austin are talking about James’ nomination “didn’t I say? He is a bullshit artist, he nominated me because he thought that I respect him coming to me.  No I just didn’t take it as valid.  It wasn’t a good enough reason.” She goes on to say “he is a half ars*d piece of sh*t and now he is going to show his true colours and he does it in a sort of vapid sort of way.”

James is in the bedroom talking to Bobby about his nomination, “that was very hard for me mate.” Bobby tries to console James.

Janice is talking to Stevi and Chloe-Jasmine in the garden, “you know what, I would never come in the way of you and your Mrs. I just feel like she is a daughter. I’m not trying to come in between you ever and I don’t want you to think that.  You’re the man – you take care of your Mrs alright? That’s your wife to be.”

Jenna confronts Natasha “I will say this Natasha, I am sorry you think that I am talking behind your back but you can go around to everyone.  I have not said a single bad thing about you.” Austin is also defensive about Natasha choosing him for nomination.Natasha tells Austin, “you’re not even listening to what I have to say. You’re just twisting, you’re just making up your own scenario.  I nominated you because you get aggressive, you get loud, you can’t just come and have a conversation and if someone has a different opinion to you, you can’t handle it.”

James is outside on his own worrying about his decision to nominate Austin while the rest of the Housemates are in the kitchen talking about him nominating James. Jenna says “that’s like Farrah nominating me.”  Bobby tries to defend James: “I think he did it because he cares for you.”

Janice is in the Diary Room and cries as she reads her letter from her fiancé, Rocky.

In the bedroom, Jenna is questioning James on his choice of nominations, “I’m trying to tell you that there is a point in time where you have to be loyal…you picked Janice over me – it’s a little f**ked up.” She carries onto say, “I saved you’re a*s because I believe in you and then you nominate me and also saved Janice over me…ok so we see who you are James, you need to prove what loyalty is.” James begins to get annoyed, “I’ve got plenty of loyalty.” Bobby tries to calm the situation “it’s only a different point of view, I see James’s point of view, I’m not just saying it because I want an argument.” James questions Austin about being in the wrong and Austin says “you picked Jenna over Janice and now you have picked me over Janice, it just reiterates the fact that you have drank the coolade and you are brainwashed by somebody who is so…” Austin begins to shout, “so how the f*ck is sending me home two days before the final going to change that.” James is trying to reason with Austin: “this is why for the last five days I have tried to sit you down and tell you how you have been and how you’re acting, I feared this day coming.” Jenna questions James further about his choice of nominations, James walks out the room, “both of you crack on”, Jenna tells him to “crack on with your f**king daft a*s loser self.”

In the bedroom, James is talking to Janice and Natasha about Jenna and Austin “all they want to do is shout, shout, shout.”Janice comforts James, “he is wrong and he has been out of line, I haven’t even begun to give what I think.  None of them can look me in the eye.” Jenna walks in, followed by Austin. Austin turns to Janice, “you are a terrible example of a women and a mother, your children would be so embarrassed, you’re f**king the worst excuse for a women ever.” Janice sticks her fingers up at Austin and tells him to “kiss my a*s.” Austin responds, “you’re such a good mother to throw your middle fingers up on National Television, you f**king embarrassment of a mother, you should be ashamed.” Janice turns around and pulls the duvet over her while Austin continues, “that’s right, I didn’t think you had anything to say, you stupid c**t.”

In the kitchen the other Housemates are appalled at Austin’s behaviour, while Austin is still arguing with Janice in the bedroom.  He tells her, “what an embarrassment to society, run around with your tits out and you’re spreading your legs.  You’re just such a nasty excuse for a woman…miserable…who has to pop from reality show to reality show like you do to f**king get a pay cheque.  Get a job, learn a trade, get some education, you stupid f**king b*tch.”

Austinwalks into the Kitchen where the other Housemates are discussing his behaviour. James tells him “you are letting yourself down mate, you are embarrassing yourself, you should be ashamed of yourself.  You have a nice family back at home that are watching you, you should be embarrassed about how you’re acting and how you’re treating people.”

Natasha gets annoyed with Austin’s behaviour too, “I’ve had enough of your f**king loud voice, this is what we have all the time from you!” Austin doesn’t back down despite the other Housemates telling him he is wrong. Austin turns to James and says, “James f*ck you, you’ve got no balls.” Bobby adds, “do someone a favour and evict this man straight away because it is disgraceful.”

Austin has been talking to Big Brother in the Diary Room for twelve minutes, “I have done nothing but be honest and truthful with everybody in this House and that is why from the start I wanted to share about my brother and my mom, because I’m f**king p*ssed off.  I had to bury my brother and then send my mom to prison. I saw my mom for a week before I came to London and I come back to Huddersfield and see this amazing family that my husband has and that p*sses me off because my family is self-destructive and crumbled from within and that sh*t p*sses me off and nobody can seem to realise that what I am going through. I am f**king angry and I’m sad and I am hurt by all of this, but for some reason everyone takes her side.” He begins to cry and tells Big Brother he doesn’t mean to upset anyone because he has respect for them.

Austin walks back into the living area, crying and apologises to the other Housemates by telling them that he is really hurt, “I feel like an a**hole.” Bobby goes over and hugs him, “it’s not because we don’t care about you or understand your pain…dry them tears and I’ll make you a cup of tea.” Natasha and James try to calm him down. Austin apologises, “that was bang out of order to say those things. I’m not going to make excuses, it was f**ked up and inappropriate by any means that is an understatement.  It’s absolutely the last things that should have come out my mouth.”