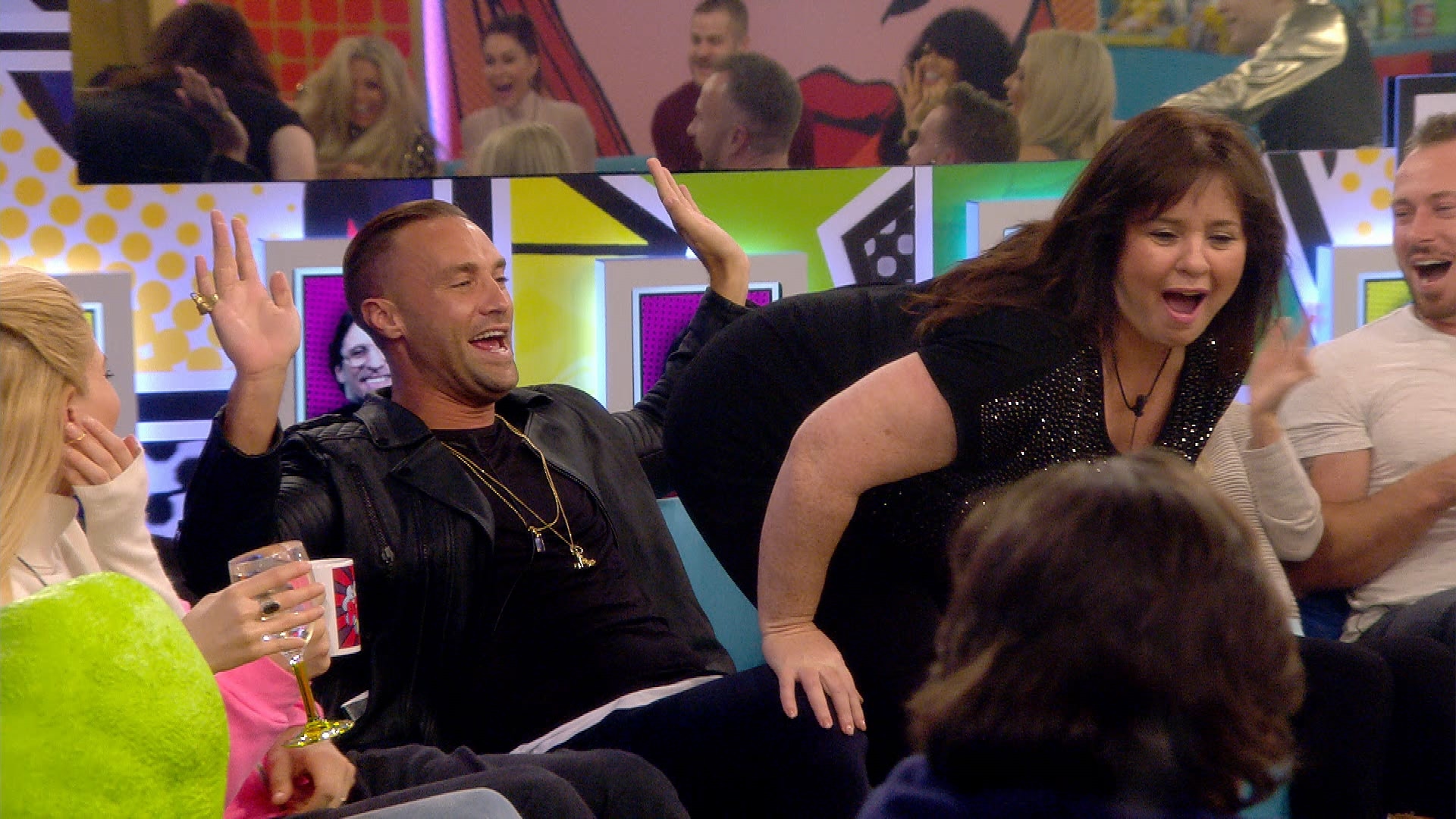 On tonight’s show…  Spencer and James discuss a possible alliance – ‘Jemser’, Stacy confesses an attraction to Brandon , Spencer tells Coleen he now see her as a ‘major player’ in the game and Coleen crosses the line with Calum.

Austin asks Heidi to ask Spencer to close the door leading to the garden. Heidi explains to her husband that some of the Housemates are cold and closes the door. Spencer smirks and waves goodbye to Housemates in the garden.

In the garden, Spencer asks some of the Housemates, “How many times more do you think I can leave the door open before somebody cracks.” James J tells him he will get bored first but Spencer smiles and hints that Austin is “cracking.” James J says that Spencer wimped out by letting the door be closed so Spencer slides the door open again. “You’ve got him dancing to your tune now,” Nicola quips to James and the Housemates laugh.

Angie tells Spencer that people in the Living Area are “pissed off” at the door being open. Spencer argues that Housemates have warm things they can wear and claims that Austin “walks around in his underwear all day.” He tells Angie that James J told him to open it and as James J explains, Spencer closes the door so the explanation is cut off.

James J and Spencer say that they will have to form team “Jemser” to match any antics if Jedward get mischievous.

Nicola goes into the house but opens the door wide. Austin shouts that he is being “wound up’” and says James J should use her to wind him up “piece of s**t.” Nicola says she’s “no one’s puppet.” Housemates in the garden comment of Austin’s outburst. “You can’t have a temper like that in this type of situation,” Spencer

James J enters the House and explains that everyone is their own person and asks him not to shout at him, “I don’t want to go there with you.” During their conversation, Spencer slides the door open and comments: “James, why did you tell me to open the door mid-argument with Austin.” Austin and James J ignore him.

Housemates are given a task that must be kept secret from the target, Bianca. Housemates must eat a pizza in 10 minutes without Bianca seeing them.

Most of the Housemates are in the dining area. James J says it “grosses” him out when older women date younger men. James C questions him about “two consenting adults…” and James J winks to show that he is joking. Stacy and Coleen are clearly annoyed. James C gets in on the act. James J eventually tells Stacy she is the easiest person to wind up and says that even if he thought like that, he wouldn’t say it. “I think you would,” Stacy tells him.

James C is in the Diary Room to hear instructions for the next part of today’s task that relies on solely on him. He must lead Tony the Show Pony through the house without Bianca seeing him. James C laughs: “It’s going to be wonderful to share a brief time with something whose IQ is probably greater than some of the people in here.”

While Bianca is in the bedroom James C walks Tony the Pony through the house and into the garden and announces, “I am the Lord Commander, and this is my steed!” Housemates are quietly excited as James C completes the task.

Some of the Housemates are in the Living Area. Jasmine tells Calum he looks “nice today.” “You taking the piss?” he asks. Jasmine says no and that he looks good in green, “That’s why I wear baggy pants so you can’t see my boner.”

For the final part of the today’s task Brandon host a secret rave in the Snug. Housemates must all enter in 10-second intervals and rave for at least 30 seconds without Bianca suspecting a thing.

Later, Big Brother has gathered the Housemates to reveal the results of today’s secret task. Housemates successfully distracted Bianca and have therefore passed. They will be rewarded with some of Bianca’s favourite food and will listen to some of her favourite songs.

Stacy is talking to Big Brother about men in the house. She laughs as she says that she wonders which of them “I can at least try to kiss.” She says she that if Calum wanted to play a “little kissy kissy thing with me I would totally do it.” She mentions that she “really likes” Brandon. “There’s a fire in that guy, he’ll be the one who pulls your hair and there’s something really sexy about that, he gives you the eye where it’s like, ‘I will f**k the s**t out of you.”

As a reward, Big brother is playing some of Bianca’s favourite tunes into the house. Some of the housemates enjoy watching the Housemate dance from the garden and notice James J twerking with Angie. Calum laughs that James J is “so feminine. “Camp as f**k” Austin jokes and the pair laugh. Calum adds: “Oh bless, she’s loving it.”

Angie comes into the garden and Calum tells him this has worked wonders for him. “I used to be known as the playboy lothario, now I’m doing a show with my mum. Angie laughs and asks for reassurance, “You tell me if I’m making a fool of myself.’ “You’re doing great,” Calum

Housemates are in the Living Area playing a game of Dare. Coleen must perform a sexy lap dance to the housemate she finds the most attractive. Coleen sashays over to Calum and performs a dance for him. All of the Housemates cheer.

Spencer is next, he must choose one Housemate to ask them any question he likes – and they must answer honestly. He starts: “With all due respect to Calum’s mum,” then asks that if she had her red wine and Calum was in the Jacuzzi and Jamie was in the shower, which one she would she “get wet” with. Housemates chant “pick one,” and Jasmine names Calum.

Jamie, Coleen, James J, Stacy, Austin, James C and Brandon are in the garden. Jamie asks if he is “too nice.” Coleen tells him not to be anything “other than you are,” and Housemates agree. “Although I mess about with Calum, if I was younger and in here it would be you,” Coleen

Calum joins the Housemates in the garden and hears the end of the conversation and isn’t to pleased at being spoken about. Stacy says she he is still he fiancé but Calum seems tetchy. Calum returns to the House and on being asked by Ray J tells him he is good but also adds “f**k-off.” James J thinks Calum assumed they were all talking about him, “He’s misunderstood that.”

Stacy follows Calum into the house and explains that only nice things were being said about him. He assures her he is “cool” and says that he doesn’t need to talk about it. In the garden, Coleen mentions that Calum is more “sensitive” than he makes out.

Jamie comes to the bedroom and explains the garden conversation was just “banter.” Calum tells him that they are ok but says it was other people, “decision made on eviction day.”

Calum, Jamie and Spencer are talking about tonight’s events. Spencer says that the good thing about those games is “it changes my whole nominations schedule.”

In the garden, Coleen says that she feels Jamie is “constantly in Calum’s shadow.” Coleen says although she adores Jasmine, “I think you lead him (Jamie) on.” Jasmine explains that she and Calum are “family” but she is genuinely attracted to Jamie but wouldn’t go there because of his current personal circumstances.

Spencer joins housemates in the garden and says, Coleen, she did a “Power Play.” He explains: “You went against a major player and made a chess move.” “Have I exceeded your expectations,” questions Coleen. “No matter what you did, you just put a hand down.”

Calum is talking to Big Brother about what he overheard earlier. He says that he has only “praised” Coleen since being in the house. He thinks he heard Coleen refer to him as a “one night stand kinda guy.” He explains that it may have been to make Jamie feel better, “But I’m not going to be put down to make someone feel better.” He adds: “I’ve worked my ass off to change a reputation that I was stuck with, I’m not that dude, for someone to f**king call me out like that it f**king pissed me off.” He ends: “If I’m right about what I think, it would make nominations a lot easier.’