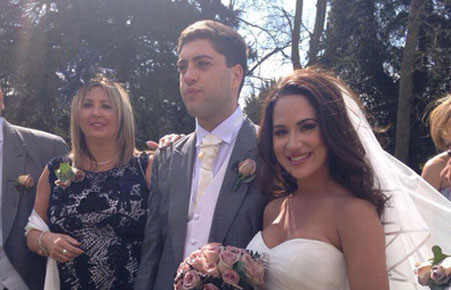 The pair tied the knot in April just nine months after meeting on the fifteenth edition of the reality show.

According to the Daily Star, model Kimberly will now be returning to the States.

A source told the paper: “Steven and Kimberly have split up.

“Kim is returning to the States for good.

“No one knows if this can be saved, but it’s really not looking good.”

Their marriage was rocked just 12 days after the wedding when Kimberly was handed a deportation notice because her current visa was linked to her ex partner and she had not sorted a new one.

The couple appealed and were given a tribunal date for January 2016. Kim was told she had to remain in the UK during this time.

If she however chooses to return to US now – she won’t be allowed back in if she and Steve try and give it another go.

Kim and business man Steven married at Down Hall in Hertfordshire earlier this year, with BB housemates, Helen Wood and Bianca Lake, as bridesmaids.

Steven proposed to Kim in the Dairy room when they returned to the Big Brother compound.