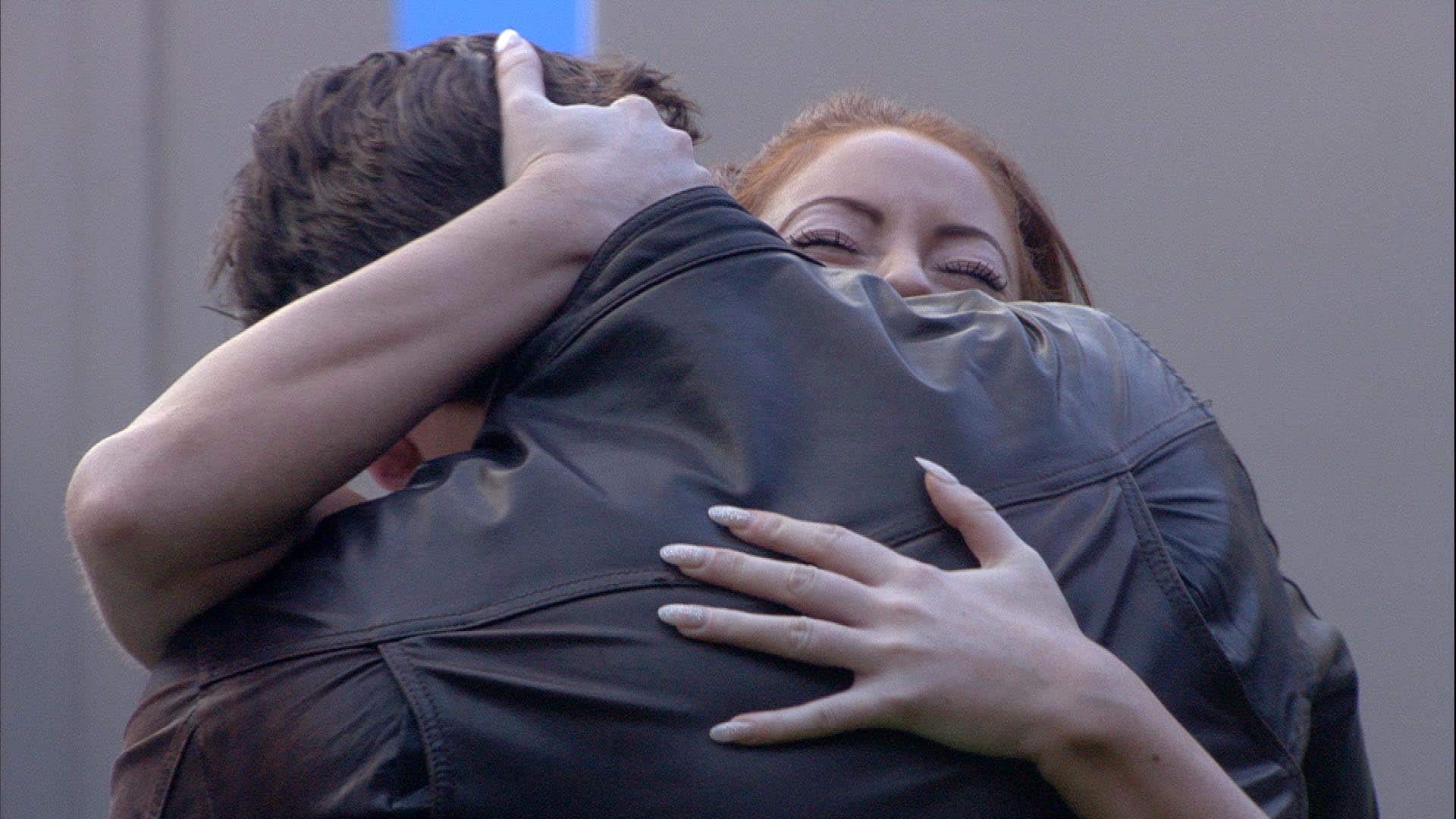 On tonight’s show: The shopping task gets underway with connections invited into the house, Andy’s boyfriend surprises him with an engagement ring and Laura is reunited with her long lost love

Big Brother gathers housemates on the sofas for the start of this week’s shopping task.

Big Brother will push their loyalty to the limits. They will be faced with fantastic rewards however all rewards will come at a price. In The Other garden, housemates will be placed on revolving pods and presented with a selection of luxury prizes. Housemates have one simple choice, resist the reward and earn loyalty points for the house or spend crucial points by turning around and receiving their prize.

The first temptation of a full English breakfast is offered to Jackson, Sam, Alex and Chelsea. They don’t turn around so they earn loyalty points for the house

Ryan is talking to Big Brother, he’s speculating that he will be offered a spray tan; “Oooo, spray tan, spray me! I mean, even if I run out of fake tan I’ll just use gravy granules mixed with a bit of water, I’m sure it will look alright.”

Emma, Charlie, Jason and Andy are called to the pods; Big Brother announces that Jason’s dog Cleo is waiting to be seen. Jason becomes emotional, however they all resist turning around. Charlie comments; “You have had her absent before, I know it doesn’t make it any easier.” He replies; “I don’t need reminding. I’ve also had you absent.”

Housemates return to the house, Charlie reminds Jason again that Cleo has previously been absent from Jason. He asks her to stop talking.

In the bedroom, Jackson revels to Alex; “I’m getting sick to death of Chelsea, I can’t put my finger on it. Its like an over powering I know.”

Jason is talking to Big brother in the diary room; “You’ve done Charlie and you’ve done Cleo, what next? You’re trying to break me! I’m glad Charlie didn’t turn around. I’m glad Cleo is OK.”

For the next part of the shopping task, Laura, Jayne, Evelyn and Lateysha resisted turning for a pamper hamper.

Ryan, Charlie, Hughie and Latesyha now face the temptation of turning for Hughie’s mum. As it’s Hughie’s birthday, housemates tell him to turn around. He does and wins a birthday party with his mum.

Hughie and his mum share a birthday cake and she advises him; “Everybody is so proud of you. You need to calm it down a bit. It’s your life, that’s all that matters.” Hughie tells his mum that he ‘wont argue or take off his clothes anymore’

Hughie returns to the house, Ryan asks him; “Did she say what got shown on TV?” He replies; “Everything was shown!”

In the pod, Ryan is feeling paranoid; “I think we should swap beds or we don’t do anything anymore…” Hughie agrees to ‘calm it all down’

Laura, Andy, Evelyn and Emma are next up to resist temptation and earn the house loyalty points. Emma’s boyfriend Josh, Andy’s boyfriend Ed and Laura’s long lost love Bernado are waiting in the garden.

Emma, Laura and Andy all turn around and are over the moon with the result.

Bernado tells Laura, “I crossed an ocean to see you!” She is shocked to see him; “I can’t believe you are here!”

Andy is overcome with emotion. He asks his boyfriend; “Will you marry me?” Ed replies; “I can do one better…will you marry me?” He presents Andy with a ring and gets down on one knee. Andy accepts and the pair hug and kiss, ‘grey and old baby’

Andy tells Laura, Emma and Evelyn that he has just got engaged and they congratulate him. Evelyn returns to the house and relays Andy’s good news to the rest of the house.

Housemates run out to the garden and shout out ‘congratulations’ to Andy.

Laura, Andy and Emma return to the main house, and given 15 minutes to pack essentials for their dates.

Laura tells some of her housemates; “The guy that I met that I didn’t get married for, met in Miami, has flown from Mexico! It’s been two years!”

Andy is in the diary room talking to Big Brother about his engagement; “I can’t believe it! I love him so much. This is the best day of my entire life! I’m not sure I like the ring, but other than that it’s amazing!”

In the bedroom, Laura reveals to Evelyn; “I said when I met this guy I would have his babies!” Evelyn shouts; “Oh my god you guys are going to get married!”

Ryan is in the diary room talking about Hughie; “My head’s all over the place. I’m worried I’ve disappointed my mum. I’m so nervous. Its made me realise I can’t even kiss him. I do genuinely care for him. I didn’t think it would be this tough!”

Emma, Laura and Andy head back to The Other house to be reunited with their loves.

Emma tells her boyfriend that she ‘just wants to leave with him’. In the bedroom Josh tells Emma that he got ‘warnings’ from her parents; “You can kiss and cuddle, full stop.”

Laura is talking to Big Brother; “I want to thank you so much. This guy, I met in Miami two years ago, I was still engaged. We met in a club and it was pretty much love at first sight. He walked towards me; it was the strongest connection I’ve ever felt in my whole life. I went home and told all my friends and family, if I ever see that guy again I’m going to get married to him and have babies. He’s the one! We’ve met each other once, never kissed or slept together. Now he’s here with me on Big Brother, this experience has to top everything that’s ever happened in my whole life! He’s absolutely gorgeous.”

Andy and Ed advise Laura that Bernado does like her and that she should relax.

Lateysha is in the diary room; “I’m over the moon for them! Andy got proposed to, that’s amazing! Emma doesn’t stop going on about her boyfriend so she must be buzzing. I can’t believe someone has come for Laura from Mexico…I can’t even get a text back! If my baby daddy were to come in the house, I would probably have a lot of sex here.”

Laura and Bernado are talking about what she did with Marco in the house, he tells her; “Look. I’ve made my fair share of mistakes. It doesn’t come natural to me to judge what you’ve done. I will hold against you anything that happens from now on.” Laura replies, “I am the most loyal person. What happened happened. I’ve beaten myself up about it a lot. ”

In the garden, Chelesa reveals to Alex; “You’re the most nicest gentleman I’ve ever met in my life!” The pair hug

Lateysha is talking about Chelsea in the bedroom; “He’s sucking a*se!”

Andy states to Laura that Chelsea ‘has been there’ for him.

It’s time for Andy’s boyfriend to leave, the pair say their goodbyes