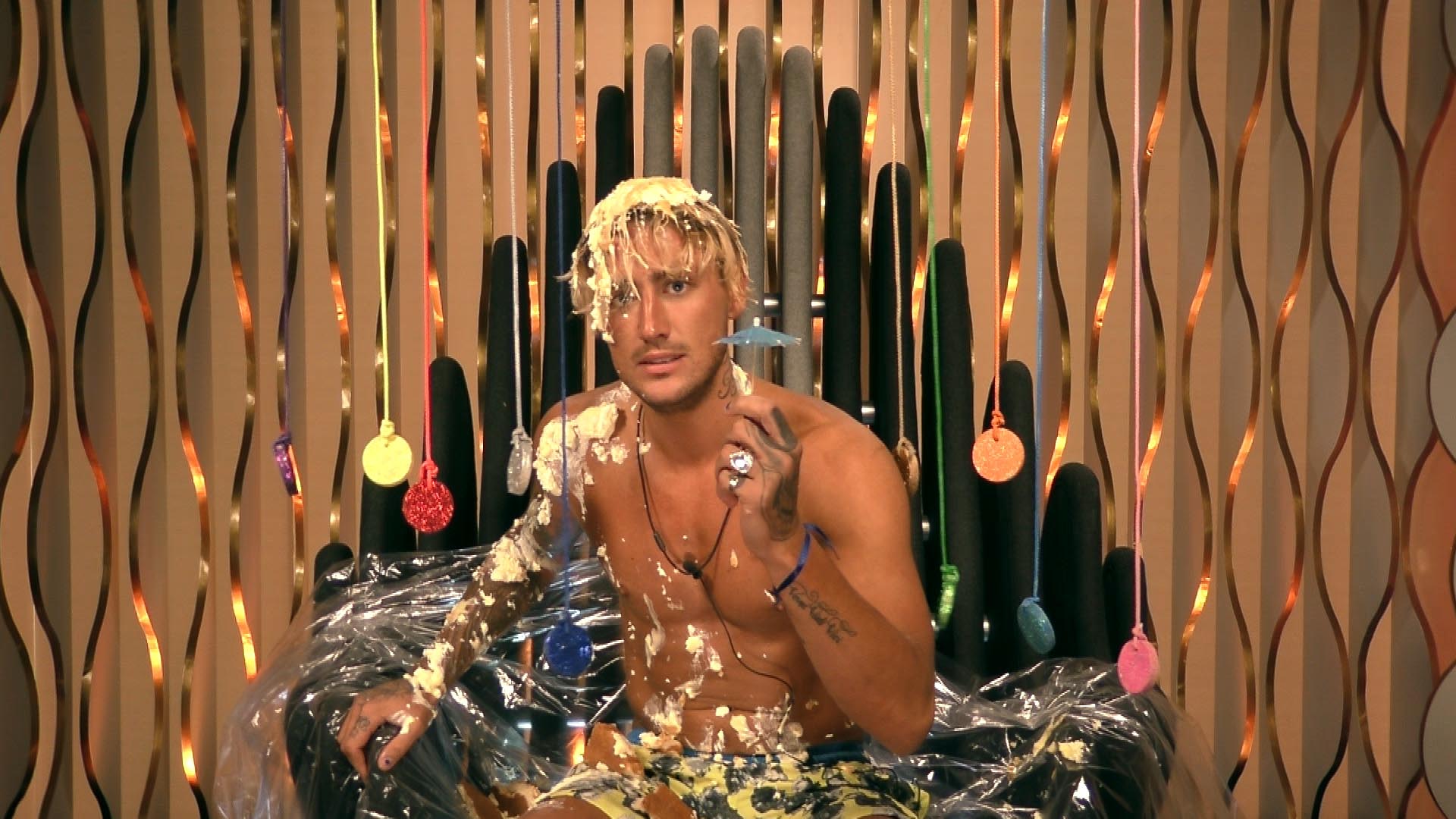 On tonight’s show, catch all the fall out of Katie and Sam’s departure!

Katie and Marnie are talking in the bedroom, Marnie comments that when people Google her, her ‘fanny comes up’. Renee and Ricky believe that Bear should be in the final

For today’s task, housemates are called separately to the diary room where they are asked a series of general knowledge questions. For every question they answer correctly, housemates are allowed to pull one of the colourful cords that are hanging down in front of them. Some of the cords do nothing, some contain a prize and some will result in the housemates being custard pie-d

Marnie, Ricky and Samantha win the task an are rewarded with a selection of different pies. The rest of the housemates are not allowed to eat them, however Bear tucks in, followed later by Katie

In the garden, as housemates are about to custard pie Bear and Katie, Bear takes the pie from Aubrey’s hands and pies her instead which annoys her

Aubrey then chases Bear around the garden with pies, and then goes into the bedroom and puts pies in Bear’s bed

Aubrey tells Bear not to talk to her again

Later, in the kitchen, Bear is making an apology card for Aubrey

Meanwhile, in the bedroom, housemates are getting ready for eviction night. Bear asks Ricky to give Aubrey his apology card

Renee tells Bear that Chloe left a pair of knickers behind, and asks him to pack them so he can give them to her on the outside. He doesn’t pack them. Bear then collects a jar of tomatoes from the kitchen, and pours them over Aubrey’s bed. Renee is annoyed with Bear’s actions, Marnie says she ‘got his back up’

Big Brother calls Bear to the diary room, and tells him what he did was not OK and reinforces the house rules

Renee sees Bear’s face mask on the floor, and kicks it under the sofas. Bear realises that he’s lost his ‘lucky’ mask, Renee tells him that Samantha left with it. He gets annoyed and says; “That’s not even funny, that was something special. That was my property and I want it back…”. Renee tells Bear that she assumes Samantha took the mask; “It could still be here!” He replies to her; “I hope so for your sake.” She yells; “You hope so for my sake? Is that a threat?” Big Brother immediately calls Bear to the diary room. Renee tells him that he’s an embarrassment

Bear comes to the diary room to talk to Big Brother; “I’m annoyed…that mask was my property…get it back for me.” He confirms that he doesn’t know if Samantha definitely took it with her.

Later, in the living area, Renee points out the mask under the sofas

In the diary room, Bear confirms to Big Brother that he did not threaten Renee

Meanwhile, in the garden, Marnie gives Bear back the mask; he is told that it was under the sofa. He is happy

Bear, Ricky and Marnie hug each other as they are now finalists

Bear tells Frankie that he will apologise to Renee; “I don’t hold a grudge!” Frankie tells Bear that he ‘does get mean’

Renee is in the diary room, talking to Big Brother; “He’s done things time and time again! I’ve used up all of my patience.”

In the kitchen, Aubrey advises Frankie to ‘keep it real’ and ‘not to be fake’, he tells her that he is real and likes to ‘keep the peace’. Aubrey adds; “Nobody runs this house! We are successful people…and half this sh*t we wouldn’t even entertain in real life. He (Bear) doesn’t run this!” Frankie understands

In the diary room, Renee tells Big Brother; “I’m good…I am back in the game! And I will give you the next three days with everything I’ve got.”

In the kitchen, Bear apologises to Renee; “Sorry for my actions, I got the wrong end of the stick…” She replies; “We have to live together for three days and I will be polite as I possibly can.”

In the bedroom, Bear tells Aubrey that she takes herself too seriously. Aubrey tells him that her and Renee ‘don’t give two f**ks’ and that he’s ‘trash’

Bear adds; “Good luck for Friday! You’ll need it!” Aubrey replies; “You can win, I know this is your dream. I’ve had platinum selling albums…you can have Big Brother…I know this is the biggest achievement you’ll probably have in your life!” Bear says; “Ego! Lighten up!” Aubrey adds; “You’re an ars*hole!” The pair continue to argue

Big Brother calls Aubrey to the diary room; “Bear has ruined the night…I don’t even feel like a finalist…we are being abused by this kid…Renee and I are sitting here being tortured.”

Tune into Channel 5/TV3 at 9pm to see the drama unfold!