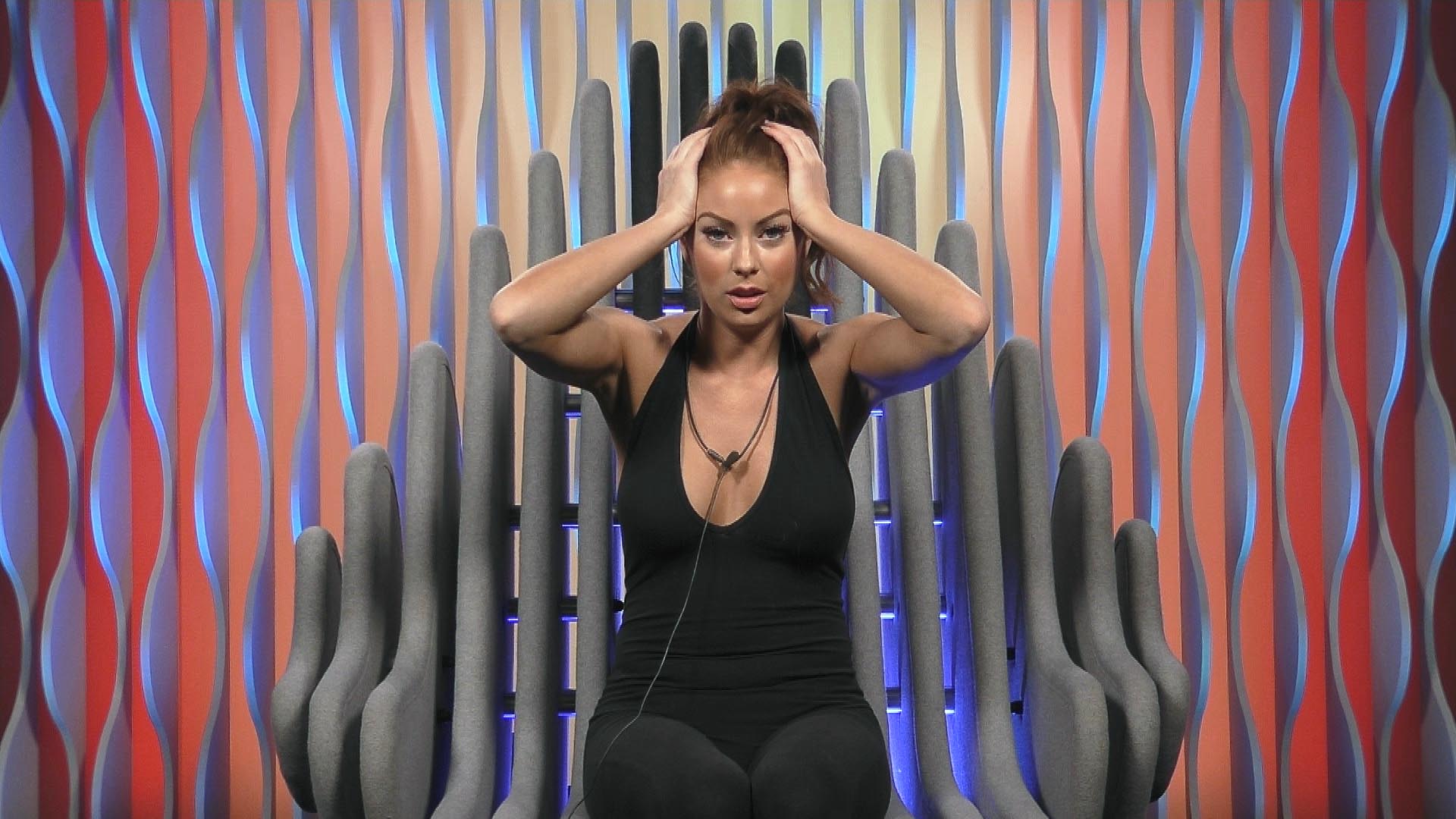 On tonight’s show: The shopping task continues, three housemates make the decision that their partners should spend the night in the house and some housemates are upset over that decision…

Last night, Laura, Emma and Andy got to spend time with their significant others

Andy is talking to Big Brother in the diary room; “I feel really happy and recharged after seeing Ed! The happiest thing that has happened in my life. Such an amazing surprise.”

Laura tells Bernardo that it’s been ‘overwhelming’. He tells Laura; “I’m not leaving here without a kiss…” The pair passionately kiss

Andy, Emma and Laura return to the main house, greeted with hugs from their housemates

Sam is in the diary room; “Andy is a lovely guy, he deserves all the happiness! Hopefully I’ll see other people get some nice treats.”

For the next part of the task, Ryan, Lateysha, Sam and Evelyn are tempted by sweets and cake, they resist temptation and earn loyalty points for the house

Next up are Sam, Chelsea, Andy and Charlie who are faced with a lunch with Sam’s mum. Sam presses his button and spends time with his mum, she tells him; “I have a message from my sisters, they want to see some sass! You’re doing amazing.”

Charlie, Jackson, Chelsea and Jason are faced with the option of choosing whether or not Ed (Andy’s fiancée), Bernardo (Laura’s love) and Josh (Emma’s boyfriend) should spend the night with their loves in the Big Brother house. The four housemates decide not to turn around as they already spent time with them in the other house

The four housemates gather their housemates to reveal the decision they were faced with. Jason explains; “You’ve had that experience yesterday, others haven’t had that experience.” Housemates seem to understand why they made that decision, however Emma gets upset and heads to the storeroom. Jason comforts her, and she tells him she’s ‘gutted’ however understands

Andy is in the diary room; “I understand and agree with their decision. There is tension. People are angry that they haven’t seen their loved ones.”

Up next to face the temptation of a spray tan with Ryan’s best friend is Ryan, Hughie, Jayne and Alex. Ryan immediately turns around. His friend tells him; “You are doing so well, your mum loves you! You’ve got nothing to worry about.” Ryan is happy that he’s had a message from his mum.

Ryan re-joins the house, he tells Hughie that his mum ‘loves him’’ and a ‘weight has been lifted off his shoulders’

The task continues, Laura, Andy and Emma are offered the chance for their loves to spend the night in the Big Brother house. Emma immediately presses her pod button and turns around. Hughie comments; “Emma you should have talked about it! You shouldn’t have pressed it.” The couples are reunited

Ed, Josh and Bernardo enter the house. Some of the housemates seem shocked, Jackson is upset and is called to the diary room

In the garden, Ed is telling Jayne about how he thinks she is being perceived; “It’s really entertaining! You don’t come across as being bad people. You have handled yourself really really well, we’ve had serious entertainment from you!”

In the bedroom, Jayne is upset and is talking to some of her housemates; “He said we’ve seen a couple of meltdowns…that’s not f**king good for my mum and dad.”

Ryan is in the diary room and talking about the new additions; “I love them. Emma’s boyfriend is so fit! Schmoking! I really do like Hughie, and I like him even more now I know my mum likes him.”

Ed and Andy are in the diary room, Ed comments that ‘everybody is so lovely’

In the bedroom Sam is comforting Jayne; “People don’t think you’re a party pooper. Calm yourself down and get some rest.”

A tired Jayne is upset in the diary room; “I need to get some sleep! I’m sick of walking on eggshells with various housemates. I feel like I’m in a f**king mad house! It’s a joke. I feel awful. I can have a laugh but I’m not these people that make a show of themselves. ”