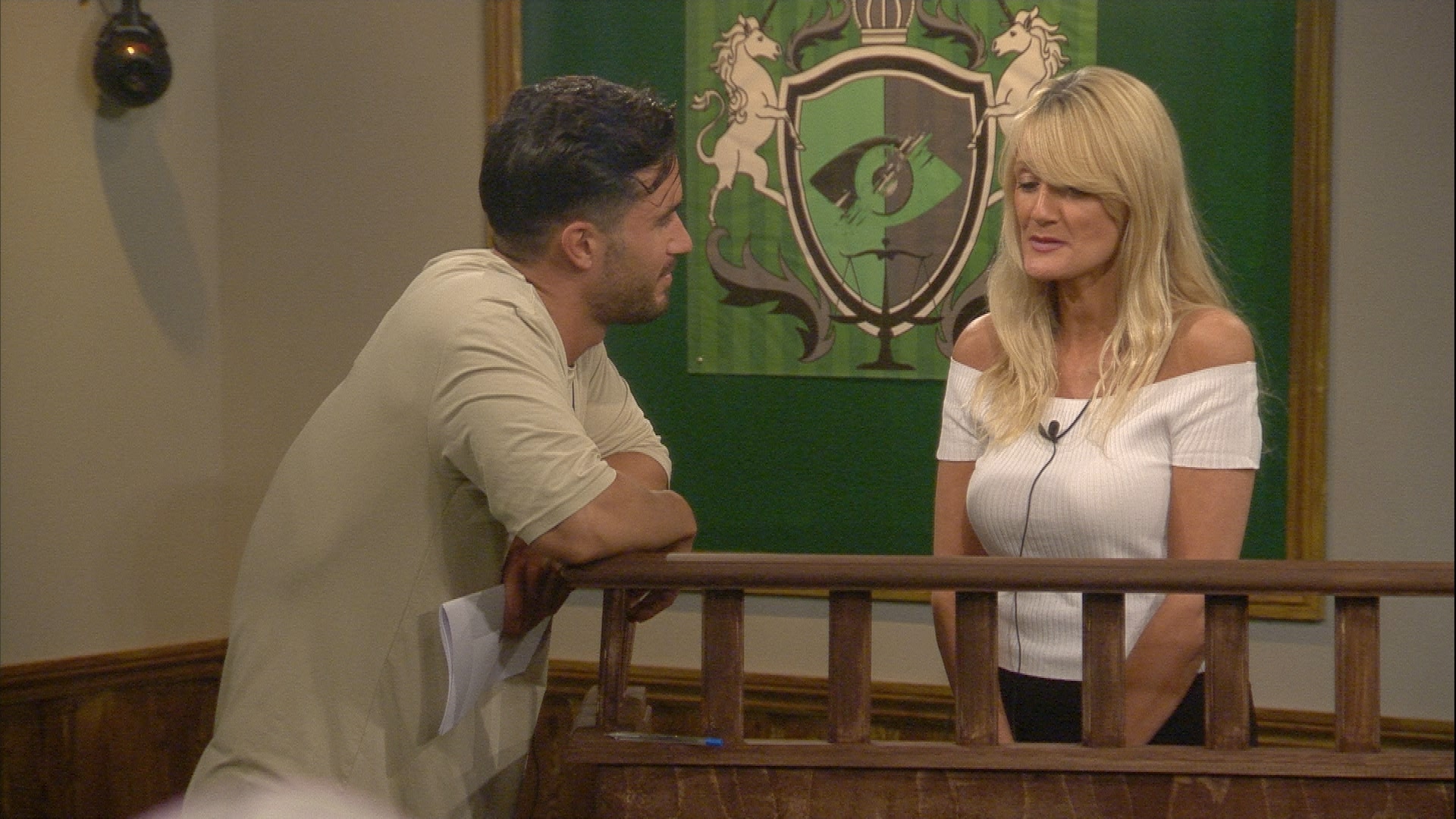 On tonight’s show: Ex Housemates Ryan, Georgina, Charlie and Lateysha return to the Big Brother house… Big Brother’s Trail Task stirs it up – Jackson and Hughie are happy to see their other halves,Jason lets rip in the Diary Room and Evelyn hakes a hasty retreat.

Evelyn is in the Diary Room taking to Big Brother about life without ex Housemate and bestie, Laura.

Evelyn: “Its weird how attached you get…I miss her, she was my only true friend in here.

Hughie and Jayne are discussing last night’s Award Show. He tells her that Andy’s Diary Room rant shocked him more that Jayne’s did which is why he voted for it. Jayne: “The thing is Hughie, Andy has a lot of love for you… things just get him down, try and make friends (with him).” Hughie: “I want to be friends with Andy but that’s what’s disappointing…we’ve been moving on from what happened in the Pod…I felt disappointed that he’s gone in there (the Diary Room) and done that.”

For today’s task, Big Brother is puts Housemates on trail. Housemates are split into two teams and each Housemate has been accused of a crime. Legal Team A isEvelyn, Jason, Alex and Andy and Legal Team B is Jackson, Jayne, Hughie and Sam. Each of the accused Housemates will take to the stand and a member of the opposing team will act as the Prosecuting Housemate. During the Trail, Big Brother calls a surprise witness to the stand to give testimony.

Andy is the first Housemate to be called to the stand he has been accused of ‘Being Patronising.’ Andy pleads not guilty. Ex Housemate Latesysha is called as an Expert Witness.

Lateysha: “…just cos you’re a bit more intelligent than a lot of the people in here, you think you’re superior to everyone.” Andy: “You will always be a subjective viewer.” Lateysha: “I don’t even know what that means.” Andy: “Well there’s a surprise! There, I’m being patronising, you have the vocabulary of an acorn.”

Andy is found ‘Guilty.’ Next in the dock is Jason who has been accused of being a ‘Game Player.’ Ex Housemate Ryan has been called as an Expert Witness.

Ryan: “You’ve got rid of your biggest competition, worked out that playing Mister Nice Guy will get you through to the final…You nominated Charlie yet she never nominated you, you’re a definition of a game player.

Due to a lack of evidence and a ‘non-united front’ from the prosecution, Big Brother finds Jason ‘Not Guilty.’ Jackson is the next Housemate to stand Trial; he has been accused of ‘Contradicting Himself.’ Ex Housemate Georgina has been called as an Expert Witness.

Georgina: “When it comes to the welfare of your child, opinions can change all the time…everyone is here for the money.”

Big Brother hears the evidence from both sides and finds Jackson ‘Guilty.’Next to be called to the stand is Evelyn, accused of ‘Looking like a Mug.’ Georgina is called in again as an Expert Witness.

Georgina: “I’m gonna say this from girl to girl…one film that springs to mind ‘He’s Just Not That into You”… You shouldn’t chase that, nip it in the bud, stop it.”

Big Brother finds at Evelyn ‘Guilty.’ Housemates have now been on trial for over two hours. Each team has two successful prosecutions. Jayne’s is the final case to be heard, she has been accused of ‘Moaniness’ (sic). Ex Housemate Charlie has been called as an Expert Witness but first has a few choice words for Jason.

Charlie: “You nominated me and you bare faced lied to me when I had that conversation with you Chelsea and I in the kitchen… I’ve seen it Jason!”

Despite Charlie’s testimony that Jayne’s Moaniness is “comedy gold,” Big Brother finds Jayne‘Guilty.’ As a result Team A has won more cases and has therefore won the Task. Jayne, Sam, Hughie and Jackson head to the jail in the garden. Alex, Jason, Andy and Evelyn are rewarded with a chicken dinner.

Jason has come to Diary Room. Most of the winning Housemates have lost their appetite.

Evelyn is in the garden talking to Sam, Hughie and Jackson.

Evelyn: “This has nothing to do with Alex, I can tell something is wrong…I just wanna kick down that f**king exit.”

Evelyn leaves the garden and exits the house through the door in the Bedroom. Housemates are in shock. A short while later, Jayne consoles an upset Andy and tells him to get some “perspective.”

o   Jayne: “You’ve had your fiancée in here telling you you’re doing great, you’ve been saved every f**king time, you have no reason to feel the way you do.”

Evelynreturns to the house. She apologises for leaving and says that seeing their ex Housemates ‘freaked’ her out.

Some of the Housemates are in the Garden. Alexand Jackson are talking in the Living Area as Jason exits the Diary Room feeling “much calmer.”

Most of the Housemates have opted for an early night. Alexand Evelyn are in the Garden, talking it out.

Evelyn: “I’ve done this to myself…I should never have sat on your lap, been so forward, screaming ‘I like Alex’…let’s try and have fun, I’m gonna keep my distance.”

Alex: “I’ve got two sides, one, I’m going to keep my distance, lets go back to before. The other side is should I change, I don’t want you to be mugged off?”

Evelyn: “Georgina saying, ‘he’s not that into you’ was a really big punch in the face.”