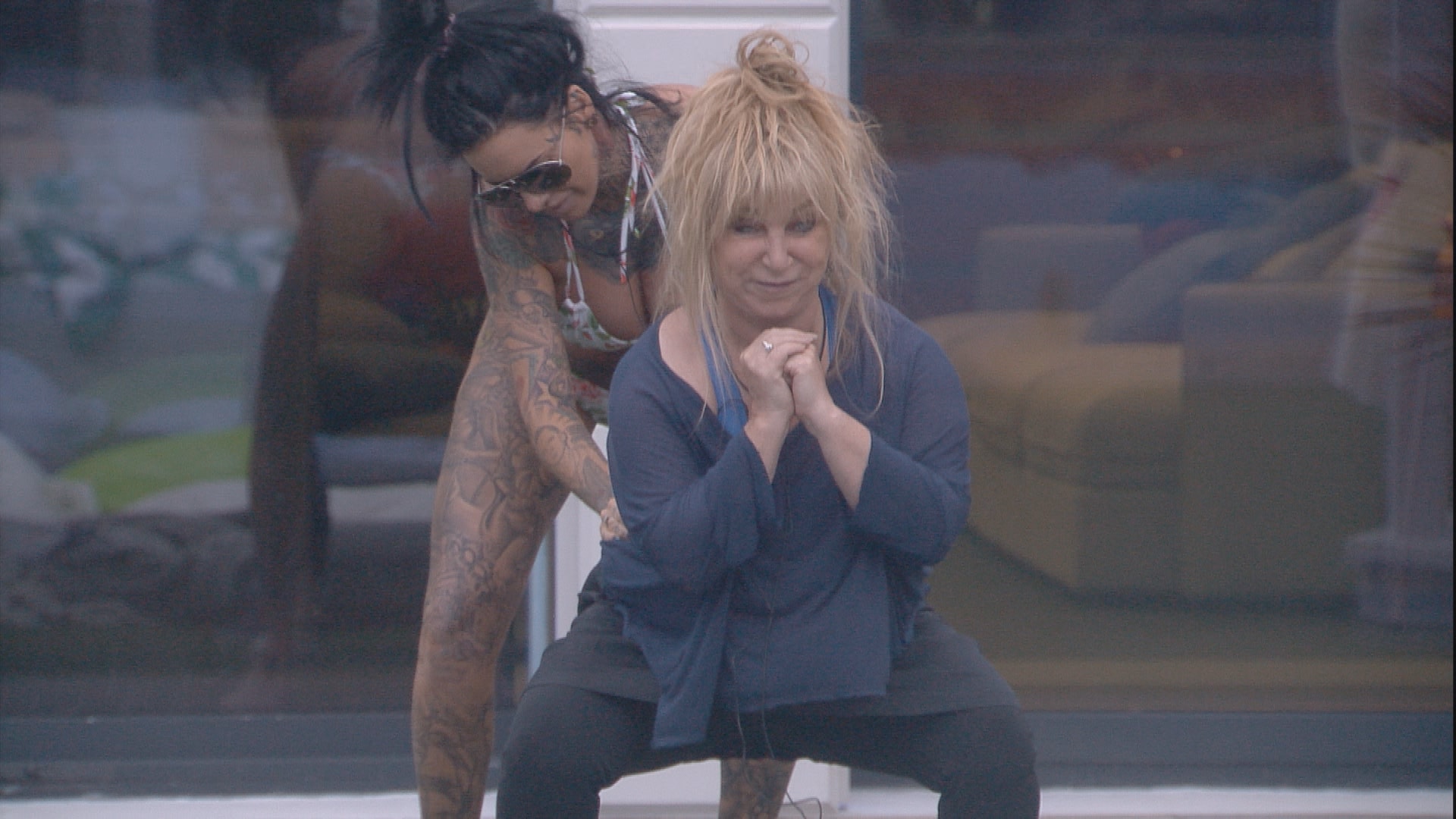 On tonight’s Celebrity Big Brother… The housemates get punished, Big Brother reveals his nominations twist and Jordan and Mirissa get close.

Sarah is emotional and cries in the living room while talking to Amelia, admitting that she’s struggling with not sleeping.

Big Brother gathers housemates to tell them they are being punished due to housemates discussing nominations. Sam and Jordan are caught out, as is Brandi, and consequently the house are given basic rations.

Sarah goes to the diary room and is emotional, breaking down in tears. She tells Big Brother: “It’s so noisy, it’s so hard to sleep in that room. The snoring, the coughing, you know what I mean. No offense to the guys”.

Jemma leads an exercise class with Sandi and Helen and teaches Helen how to do deep a squat, she says “ass to grass”.

Sam apologises and tries to make amends with Trisha in the bedroom.

Trisha talks to Big Brother in the diary room about Sam’s apology.

Trish talks to Sam in the garden and says she can start drama for no reason as she gets bored and is temperamental.

Housemates are gathered in the living room and Jemma asks housemates to name someone they would kiss in the house. Trisha chooses Sam and says she’s used to choosing ‘a**holes’ which Sam is offended by. Amelia also chooses Sam. Trisha discusses her soft spot for Shaun and says: “he’s so f**king sweet, and handsome, a sweet guy, not c**ky, he’s gentlemanly and always holds doors open for me.” She explains “I date a**holes but I love sweet guys and I think he is the most attractive” referring to Shaun.

Chad is measuring his bi-ceps in the bedroom with Amelia. She asks him why he is measuring his arms and he says “Because I have got to measure if their small then I’m not eating enough and if I’m bigger that means I am eating too much.”

Chad talks to Big Brother in the diary room about Amelia and says he gets on really well with her and really likes her. He says “She gets really nervous when I’m talking to her and she shows a lot of emotion. I don’t think she’s fucking with me”.

Jordan and Marissa are talking in the smoking area and she tells him “I like a man who knows what he wants”, Jordan responds “I know what I want”, she says “What do you want?” and he replies “She’s sat next to me”.

Brandi talks to Sam and Amelia in the living room and tells her “He is jealous that, even the fact you would say that Chad is attractive. You know when something bothers you, you wind people up about it. It’s because he likes you”. Sam says “I feel like we’ve got the best connection in here, but having said that, we are only three days in. There’s an initial (attraction), that’s why I said I would kiss Amelia, there’s an attraction, she’s a really cool girl”. Amelia responds: “I’m so embarrassed, I’m really flattered actually, you’ve actually got balls Sam to say that”.

Jemma is sat in the living room with Sam, Paul, Jordan and Trisha and asks the guys “what is so scary about my t*ts”. Jordan responds, “they’re enormous” and Paul says: “they are f**king big” to which Sam asks: “what size are they?”. Jemma confirms they are a double G and Sam asks permission to poke them, which he then does and tells her “they do feel real”. Jordan asks Trisha what size her boobs are and she says “bigger than that but I’m a bigger girl, 36 triple F I think”. Paul says: “it’s a boob off, its official, it’s a boob off”. Jemma and Trisha show their boobs to Paul, Jordan and Sam and Jemma says: “they are well bigger”.

Derek, Sandi and Shaun are talking in the smoking area and discuss the events of the living room and Derek comments “I’m not against in any way, their moment is that they feel, they haven’t got these inhibitions, and the girls of our day they wouldn’t have gone there like that. I know it and you know it” to which Sandi agrees.

Jordan is in the living room with some of the housemates and says to Marissa, “Would you try something?” and holds her hand, he says “it just feels right doesn’t it”. Marissa says to him “Does it feel right to you?” and he agrees “oh it does to me, does it feel right to you?”, Marissa says “for the moment until you move onto the next chick”. Sam and Paul see Jordan and Marissa getting closer on the sofas and he names them ‘Jarissa’.

Amelia is talking to Chad on the sofas and asks him if he likes Marissa, which Chad denies. Amelia tells Chad “Paul has made it out to look like I fancy you, but I don’t.” Chad says “oh thank you, you really know how to make a man blush” and Amelia continues “I don’t graft on men” and Chad says “would you let me go after you?”, she responds “I’ve never really been grafted on” and Chad questions “grafted?, what are you making up words?”.

Paul asks Karthik for a drink but mispronounces his name and instead calls him Cathar. Karthik questions who he is referring to and reminds him of his name and they discuss the misunderstanding. Karthik later talks in the diary room and says “I’ve not taken anything seriously, it’s fine, he was just joking.”

Trisha talks to Chad in the bedroom about Amelia and tells him “that’s not who you’re supposed to go for in this house but I like it.” He is coy and she continues “that is crazy, of all the girls, Marissa first, then Jemma, then her (pointing to Brandi). She’s not the hook up type so you can’t hook up with her. What are you going to do have a hook up across the pond, you going to move to England?”. Trisha talks about how conservative Amelia is and says: “I love that you love the non-slutty one of the house, that makes me so happy.” Chad explains “No, I’m not like that, I look like I would be, but I’m not, I know what I look like and act like”, she says “aw I love the romances in this house”.