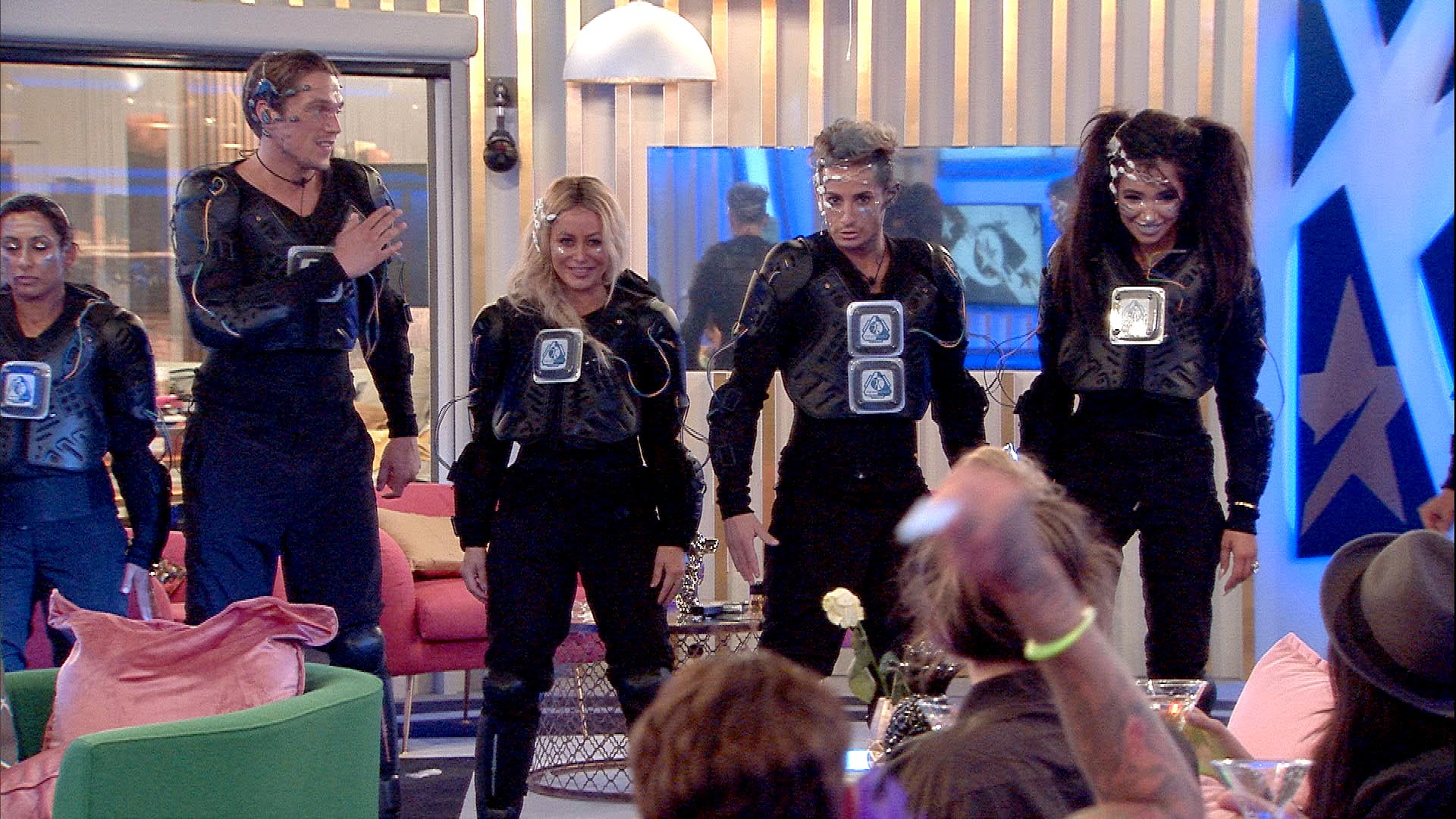 It’s the first day of the shopping task, the house has been divided into two groups: The Artificials and The Humans. Each Artificial is assigned a human to take care of and perform duties for. The group who is successful passing the majority of the tasks will win a luxury shopping budget, and the loosing team will receive an economy shop. The Artificials have their own re-charging zone room.

In the living area, Bear swats up on the task rules and wants to try and trip up his rival team, The Artificials.

In the re-charging zone, Saira asks Lewis if he is worried what might happen to Marine if he’s not around, he replies; “Of course not! If she wants to get with anyone else in there she can.”

Saira thinks they should all try and get their rival team to make mistakes, so her Artificial team can win.

Heavy D requests Chloe ‘his Artificial’ to make him some peanut butter on toast. He then asks Chloe for a neck massage.

For the first part of the shopping task, The Humans and The Artificials go head-to-head in an intelligence test.

The Artificials answer the majority of the questions correctly, therefore this group wins this intelligence part of the task

Bear requests Artificial Lewis to sit on a chair and face the wall.

In the bedroom, Artificials Chole and Aubrey are applying make-up to Renee and Katie. Chloe is commenting that she does not like the requests that Heavy D is asking her to do, which includes washing his pants.

In the bedroom, Chloe is pranking Heavy D by pouring water in his shoes and spreading chilli powder and suntan lotion on his side of the bed, that he shares with Bear.

In the bedroom, Aubrey divulges Chloe’s prank to Renee and Marnie.

In the garden, Renee whispers to Bear ‘not to sleep in his bed’

Bear checks his bed that he shares with Heavy D, some of the housemates tell Bear that someone has pranked Heavy D’s side of the bed; “Someone tell him!”

Bear, Marnie and Katie tell Heavy D to look at his bed. Heavy D states; “Who done that? I’m going to do it back to them!”

In the bathroom, Heavy D asks Aubrey, Chloe and Saira if they pranked his bed, they deny this, and the wonder why Marnie told Heavy D about his bed

In the garden, Heavy D accuses Bear of pranking his side of the bed; Bear then reveals to him it was Chloe. Heavy D apologises to Bear. Some of the housemates believe that he should not have tasked Chloe with washing his underwear