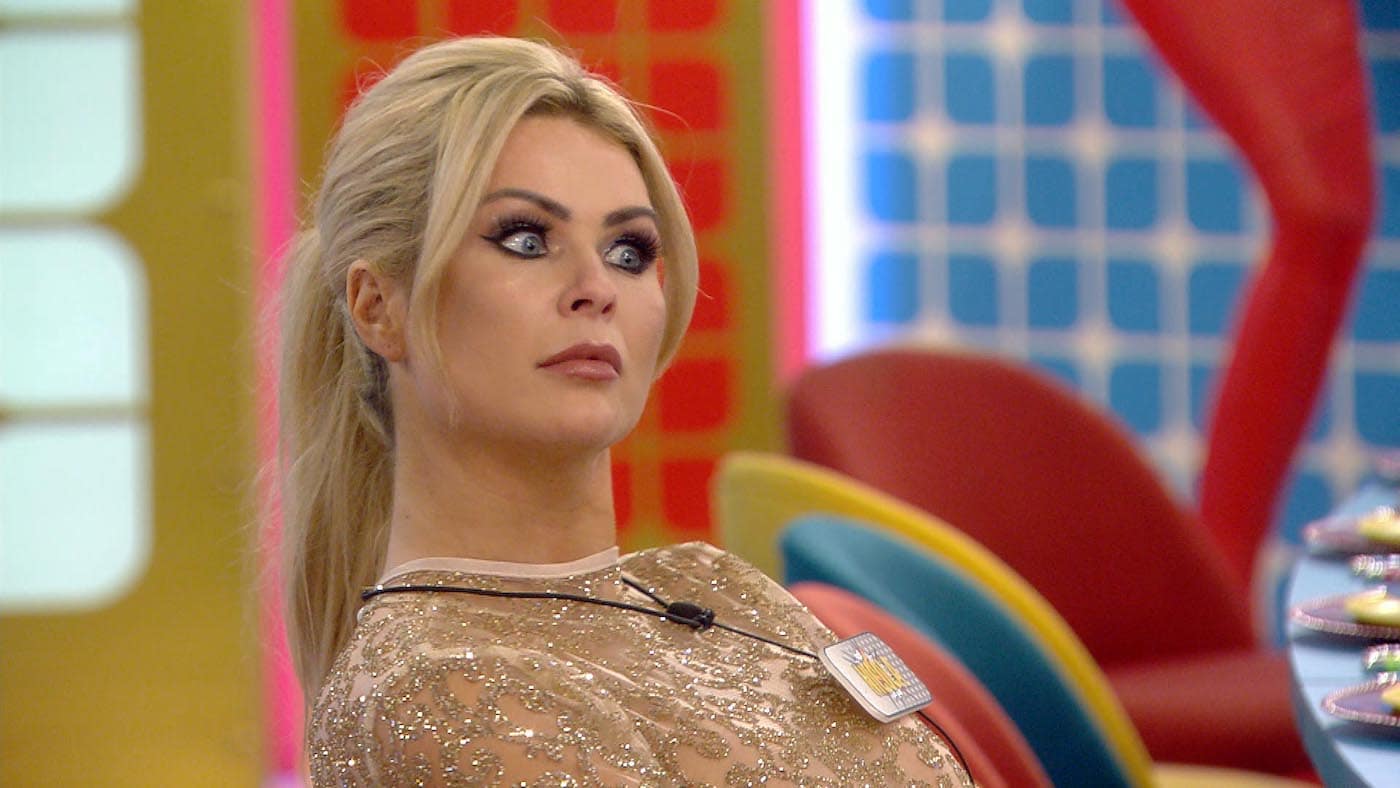 On tonight’s show: 14 celebrities enter the new look Big Brother house, housemates get to know each other and the All Stars are tasked with ‘editing out’ two of the New Stars.

The All Stars housemates are made ‘The Producers’ and are brought into a secret producers room by Big Brother. The Producers must decide which of the New Stars is least entertaining, and as such must ‘edit one out’.

The Producers decide to edit out Stacy. She puts on a beige ‘edited out’ tracksuit and sits in the garden.

Ray J reveals that he knows Stacy; “She’s a friend of the family. We experienced something real deep, a tragic thing happened…”.

The All Stars enter the living area and meet the New Stars.

Calum is shocked to see his mum Angie and greets her; “You must be crazy!” Angie explains to Calum that Ray J and Stacy have previously experienced something ‘deep’.

The first edited out housemate Stacy is in the garden. Spencer explains to her that Big Brother is ‘a game’ and ‘a journey’. She tells him that she was ‘in shock’ when she saw Ray J.

Coleen tells Ray J; “I can see you being a nightmare!” The pair laugh.

Stacy is talking to Big Brother in the Diary Room; “I just felt it was really unfair. It was shocking when I saw Ray, I kinda shut down. I want a real talk with him; I need a heart to heart with him. I just want to have fun! I’m upbeat, not the least bit entertaining.”

She continues; “Ray J threw me under the bus. When people in America tried to make me out to be something I wasn’t, he never stood up for me. I want to know why he never said anything. When Whitney Houston’s sister Pat went on the Oprah show and said I was stalking Whitney Houston in the club, I was not, we were all standing there talking and having a good time, he knows that, he knows the events of the whole night. He never said this is a friend of my family. I’ve known Ray and his family over 15 years; he never came to bat for me. I wish he had the heart to say she wasn’t stalking Whitney in the club, she’s a friend. It was a hard time, I lost everything.” Stacy laughs as she states she would have edited out Ray J.

In the living area, Bianca and Nicola ask Stacy if she’s OK, she says she’s fine.

Spencer tells Bianca that the rules are that she shouldn’t be talking to Stacy.

In the living area, Spencer tells Stacy; “This show is insane! They already broke you down a little bit. You’re in the lead! Everybody will be in a bad spot and you started in it and you already got the advantage. It’s a game!” Stacy replies; “I didn’t think come in thinking I’d just chill, you make a lot of assumptions Spencer! I’m OK.”.

Austin is in the diary room; “I’m going to give Heidi & Spencer an opportunity to prove to me that they are decent people. I already think Spencer is a complete d*ckhead! I know what to expect from Speidi.”.

Spencer tells the house; “I have split personality!”.

After Spencer’s talk with Stacy, Heidi speaks to Stacy and they both agree that they don’t want to have a problem with each other.

Coleen is telling Stacy and Angie about her and her singing sisters.

In the living area, Jamie tells Nicola that his ex-wife told him not to talk about her. Nicola reveals; “Everyone’s situation is different. Luckily, we (her and her husband) found a place to make it work. I’m so happy we can! I adore him. It’s footballers!” Jamie laughs; “We’re not all bad!”

In the diary room, Ray J is talking about his housemates; “I’m being asked about the sex tape, am I married…I’m ready to tell everybody everything! I’m cool, I’m very respectable.”

In the garden, Heidi announces; “I want to re-nominate Stacy!” Spencer reveals that when he went over to Stacy, he was deliberately trying to wind up her up, housemates agree.

Big Brother gathers housemates on the sofas for The Producers to choose a second housemate to ‘edit out’. They choose James C as they feel he wouldn’t be offended.

James C collects his ‘edited out’ tracksuit and chair and sits next to Stacy.

Heidi & Spencer are in the diary room; “Thank you for having us back! I apologise for us not winning last time. One thing I’ve learned is to not take this show personally!” He adds; “Stacy has a bad attitude! She is going to be my number one on my nomination list. We’ll give her the benefit of the doubt for now.”

Big Brother opens the bedroom for housemates to choose their beds; Ray J is asleep on the sofa. Housemates are discussing where they will sleep.

Angie is in the diary room talking to Big Brother; “Speigles? They have a game plan, as they want to win. It makes the competitiveness in me come out, but I don’t know how to play the game. Everybody is nice, I like all of them.”

Calum is in the diary room talking about his mum; “They pulled a fast one on me! Oh my god that’s my mum! I came in thinking I can be a bit more wild and a bit more loose, I still can in a way but my mother is now here to watch it all unfold. I’m a big protector of my mother. This is stopping me taking shots of whiskey and go be a flirt!”

James tells Big Brother in the diary room; “Everyone seems to be getting on but I can see there’s room for arguments! I’m quite looking forward to it. I predict the first argument will be between Spencer & Heidi and Austin.”

Bianca reveals to Austin that he thinks Heidi & Spencer are nice, Austin asks her how she can feel he’s nice as he’s be winding people up

In the smoking area, Nicola and Coleen feel that this experience ‘may not be for Angie’. The pair agrees that they like Spencer. Angie asks the pair how to get in the shower. Nicola says; “Get in, take your clothes off and then throw your clothes over. Take your towel with you.” Angie heads back to the bathroom. Coleen says to Nicola; “I’m not being funny…It’s a game! They’re not putting us in a five star hotel!”