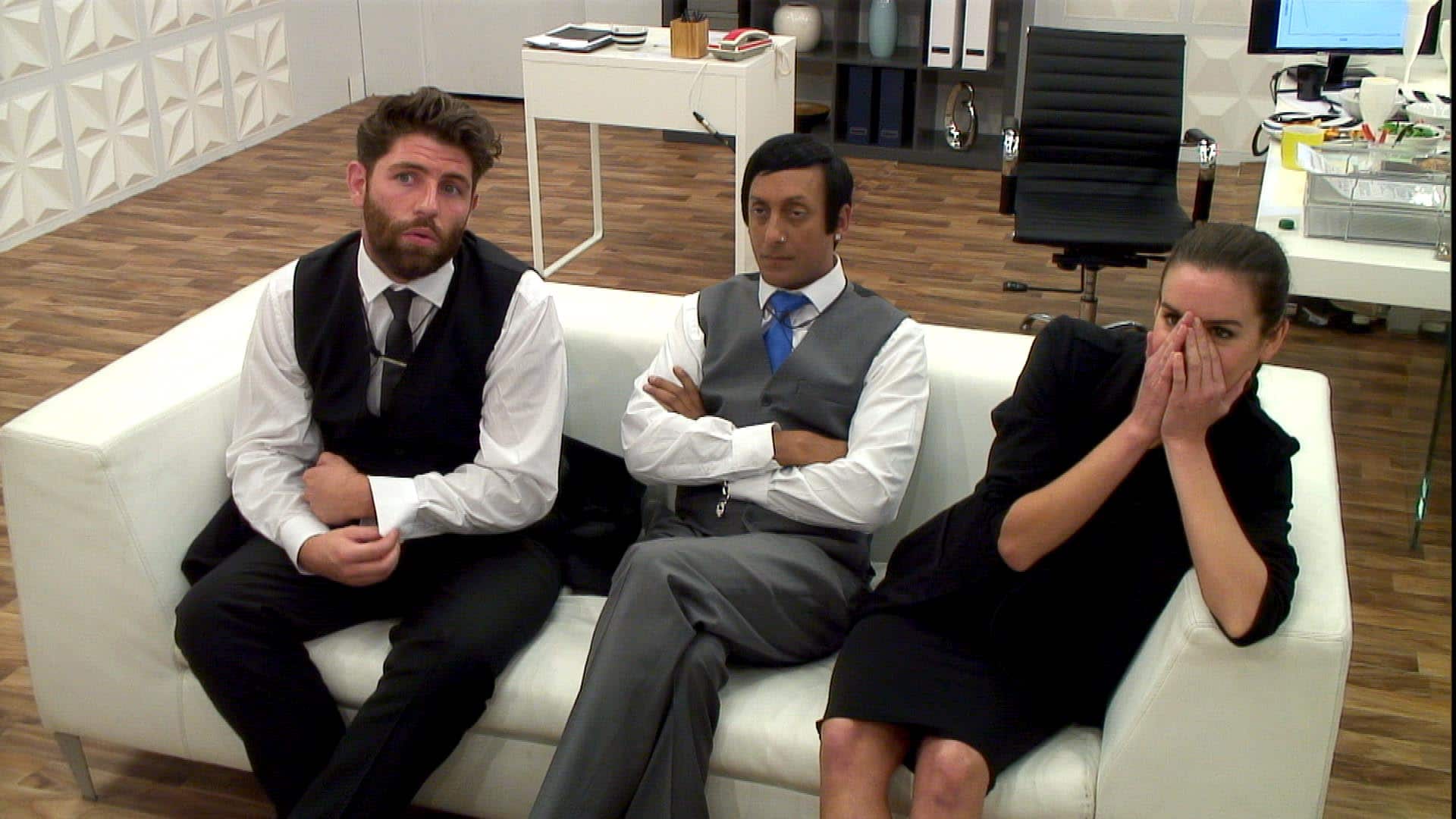 On tonight’s show: This week’s BB Corp shopping task comes to an end, Sam and Hughie fall out and Charlie is annoyed with Jason.

Ryan calls through to the reception desk to ask Georgina to bring the BB Corp Senior Management team some chocolate, she is not too happy doing this. CEO Chelsea tells Ryan that they should have decided as a team which employee to ask, the pair then argue over this decision.

Georgina is in the diary room; “I have an unhappy looking face, I hate my smile so I don’t like smiling.” Asked about her time in the house; “I really enjoy it bedsides Evelyn and Laura.” On Jackson; “I will pursue the relationship, yes of course, I’ve never had somebody say these nice things to me, I’m not going to stop that just cos I left the house.”

Georgina and Jackson are talking about her eviction outfit, she mutters; “I hate my life, I’ve completed wasted a month coming in here.” Jackson isn’t happy to hear this, and tells her she has a blessed life. He walks away

Big Brother gives the BB Corp senior management team an opportunity to promote an employee. They tactically decide to promote Georgina as ‘she doesn’t look happy’ and they want to win the task

Chelsea announces to the employees that Georgina will be promoted, some of the housemates aren’t too happy with this decision. Hughie announces; “You’re the Queen of negativity, everything about you says negative!”

For the final part of the shopping task, Big Brother asks the Big B Corp senior management team to reveal some viewer feedback to some of the employees, as part of an appraisal type meeting.

A comment aimed at Jackson is read out; “Why is he Georgina’s puppet? She pulls his strings, why isn’t he having fun with Evelyn?” Emma doesn’t agree that Jackson is Georgina’s puppet. Georgina adds; “You like making me cups of tea! I wouldn’t say you are my puppet. I’ve told you to go with Evelyn!” Jackson responds; “I’m not letting that get to me. People have their opinions. I know how I feel about you, you know how I feel about you.”

In the garden, Jason is telling some of his housemates about a night out he had with his friends for his birthday, Charlie seems bemused as to why he had never mentioned this night out to her, she walks away. Jason turns to Andy; “I’ve never lied to her about going out.”

Big Brother provides the house with some alcohol. Chelsea, Alex and Sam decide to combine the drinks to make a ‘punch bowl’. Some housemates seem not to be too pleased about their decision

Jason is speaking to Charlie, and asks her not to accuse him of lying or cheating. She says; “You did lie to me! Fine, we’re not together. I don’t want to talk about that time, it was a bad time for me.” He responds; “How about kicking my dog?”

In the garden, Jason is telling some of his housemates that he is frustrated with Charlie

In the bedroom, Charlie reveals to some of her housemates about a row she had with Jason on the outside world where he accused her of kicking his dog; “He said something that was completely not right about I kicked his dog. I’ve never kicked that dog. We were having a massive row and I ran away, and the dog was in the way and I went to push it out the way, I did not kick that dog. I’m not going to lie; I can’t stand the dog. I would never kick an innocent animal in my life! He said this on national TV cos I told him I found out he went to Sugar Hut and he got a hotel without telling me! There you go it’s all out! I found out he was Facebooking my friend, who is a stunning girl, was there at the same night.” Some of the housemates comment that Jason really does love his dog and that they would be annoyed if they had found out what Charlie discovered.

In the bedroom, Sam wanted to check if Ryan was annoyed with him about not taking part in the ‘punch bowl’, he denies it and says he was joking.

In the garden, Sam is telling some of his housemates that he just asked Ryan if he was annoyed. Alex decides to go into the bedroom to ask if anyone has an issue with the alcohol. Lateysha and Hughie tell him that there wasn’t an issue.

Sam returns to the bedroom and reveals that he thought Ryan had an issue. Ryan denies he had an issue and says he was joking.

Hughie gets involved, Alex tells him not to.

Sam and Ryan start to argue, Ryan tells him this was resolved and that has now brought it up again

Hughie is annoyed that Sam has made this into an issue; “This is all bullsh*t, this was sorted, and now Alex has come in! This is none of your business!”

Some housemates start to argue. Big Brother calls Hughie to the diary room immediately, Jason and Evelyn escort him

Lateysha is not pleased with Alex or Sam for making the ‘punch bowl’ an issue; “This house is f*cked! What have I got myself into?!”

In the garden, Sam is upset that some housemates were arguing and against him

Sam continues to get upset and angry, Lateysha persuades him to calm down and talks to her; “I was defending myself! This is not me!”

In the bedroom, Charlie is still angry with Jason, she is talking to Jayne; “He knows he cheated and didn’t want to look bad.” Jason comments; “I can hear what you’re doing, don’t talk about me, as I don’t talk about you.”

Jason asks Charlie, “Why are you accusing me of cheating? I haven’t cheated in my life! That’s a lie!” Charlie walks away. Chelsea comforts Jason

In bed, Charlie is confiding in Jayne; “I don’t know he cheated, I shouldn’t have said that. […] I’m not having that comment made about me, I did not kick that dog. He’s clever with his words, I say it how it is and he manipulates things.”

Jason is offloading to Big brother in the diary rooms “This is what I’ve been trying to avoid. I should have been the bigger person, but I snapped. I should have walked away and not said anything. I think it’s irreversible now. Its come to light what people been trying to tell me that Charlie is playing a game. I’m not surprised. I didn’t think for one minute that Charlie had anything to do with the game playing comment, I didn’t realise that there was a seed planted. I didn’t think I would be played this bad.”