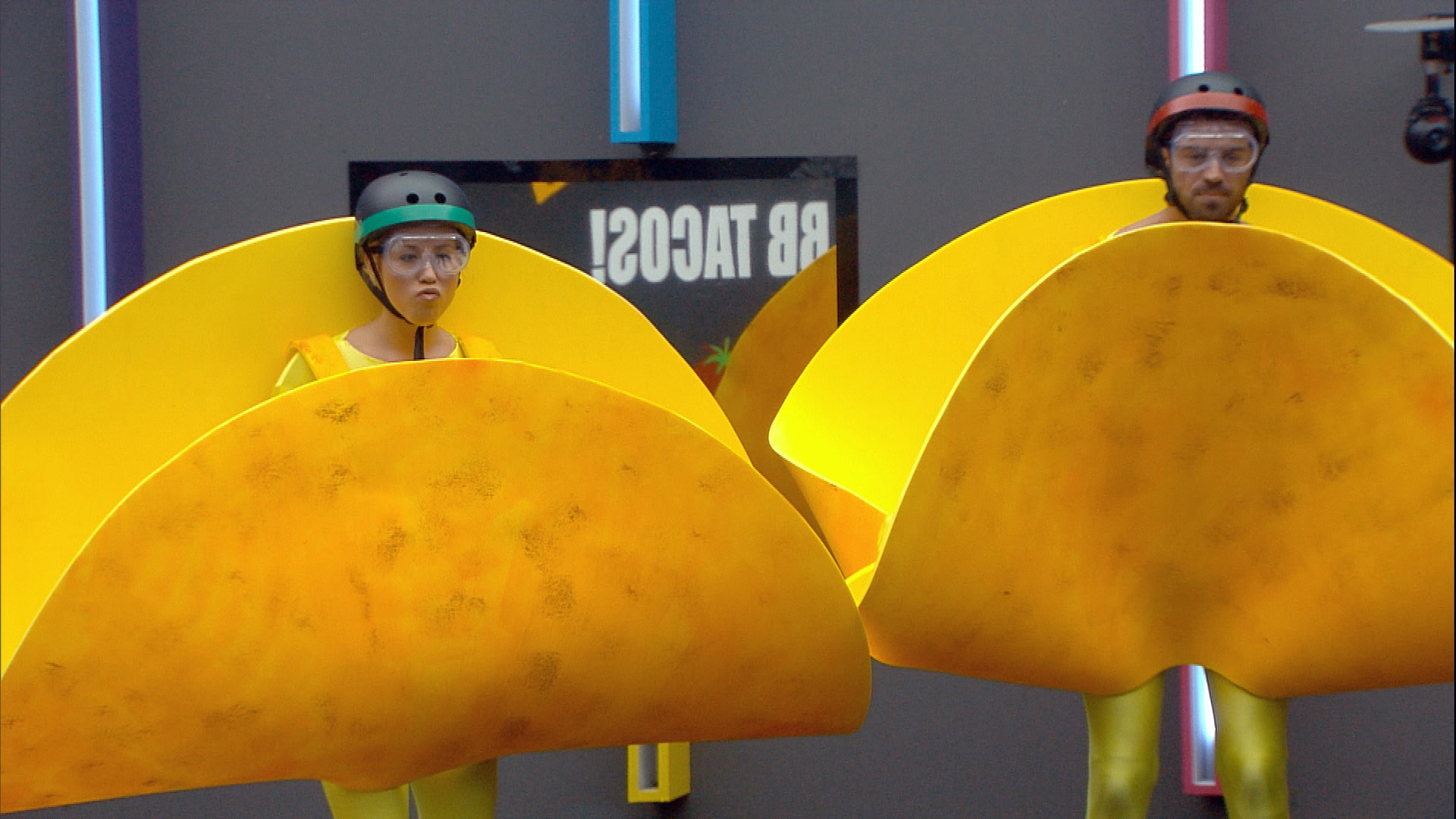 On tonight’s Celebrity Big Brother… Housemates take part in a ‘Taco’ task, and Sarah and Chad get frisky..

Derek paints his face and wakes up housemates as the ‘spirit of the solstice’ to the confusion of the housemates.

Derek talks to Big Brother in the diary room and tells them this is the scariest he has looked.

Sam is feeling mischievous and is messing up Amelia and Chad’s beds, with Sarah playfully telling him off and chasing him around the house.

Sam, Amelia and Jemma are talking in the kitchen about smells and Sam tells Jemma “Do you know what smell you suit? You suit the nightclub at 6am as its getting cleaned up smell”.

The house takes part in a Taco task, where they are split into teams and they have to fill their giant tacos with the fillings.

Sarah and Amelia are talking in the bathroom while doing their hair. Amelia is talking to Sarah about Cheryl and says, “She’s quite private isn’t she Cheryl.” Sarah responds “She tries to be. She just knows how to work it when she wants to, when she wants to be seen she is, and when she doesn’t, she makes sure she isn’t. like with the whole baby thing. She just plans things meticulously.” Amelia comments “clever lady”, to which Sarah says “She’s savvy, I’d give her that.”

Jemma and Sarah are talking in the bedroom and Jemma asks her “So have you and Chad spoken about what you are going to do?”, with Sarah responding “I think he’s going to hang in London until his visa runs out so he’s going to stick around and figure something out. I just think if we managed to get through this, in the real world, we should be alright, because we have obviously tried to reign a lot in, in here with the cameras following us all the time. Yeah we definitely want to carry on, or I wouldn’t have risked. I have just sold my house, I have taken an offer on my house and I want a fresh start from all the sh*t I have had to deal with. All my friendship circles are all related to my ex fiancé and it’s too small.”.

Helen and Sandi are evicted in the double eviction.

Jemma gives Sarah advice about not letting the boos affect her so much.

Sarah and Chad are sat in the garden and she says to Chad “I’m going to biddle” and Chad asks, “right nizzle?” to which Sarah says “sizzle”. Chad tells her “you suck!” and Sarah responds cheekily “no I don’t, not here I don’t!” to which Chad flirtily tuts at her and says “naughty”, to which Sarah says, “your time will come Mr.” Chad asks Sarah “When will my time come” to which Sam leans over to the couple and tells them “I’m enjoying this conversation. So your time Sir, will come, probably after the wrap party.” Chad jokes “It’ll could be a long day, it might be a hard time, but in the end I think we will find that things just come to work out”, to which Sarah says “I’m getting into my pyjamas, I can’t cope”.

Jemma talks in the diary room about Sarah and says she has noticed that Sarah is making a ‘huge effort’ with her and she doesn’t want to be rude and push it away but knows she has said some horrible things about Sarah whilst being in the house.

Sarah and Chad get steamy in the store room.

The housemate’s gather at the sofas to play a game with a ‘Honesty box’ where they must pull out a card and answer a question. Derek’s question reads “The weirdest thing to ever been asked for by a fan?” and he went on to explain “It wasn’t so long ago actually. I always stay behind after the shows in the foyer and do autographs and this young women came to me and said can you do me a favour Derek, and she said, I’ve signed the brochure, I’d like you to sign the brochure but I’d also like you to autograph on my right breast and I said no, I never said no I can’t, I said no I won’t do that. If you don’t do it she said, later on I will say that you tried to touch me and apparently, she was out by the front of the small theatre and she did exactly that.  She was telling people that I touched her and stuff like that. So that was the horrible thing about the weirdest thing that has ever happened to me”.

Shaun went on to tell a story after Derek finished and said “Talk of the South, TOTS it’s called, nightclub in Southend, sharpie pen, 20 years ago odd, I signed sort of just inside, a women. Just inside.” To the shock of the housemates who question what body part he is referring to. Sam asks, “The vagina?” and Shaun embarrassedly confirms and says “just inside, half outside, half inside”.

Sam and Jemma are hanging out in the living room and Amelia joins and says “stop leaving me out all the time. Do you know what this is right? Two’s company, three’s a crowd.” To which Jemma playfully tells her “Oh Amelia, will you shut up!” and Amelia says, “I’m the third wheel.”

Jemma is asking Chad about Sarah and asks him “I bet you can’t wait to have sex with Sarah? How excited are you about that?”, with Chad responding, “I’m excited to be in the real world, doing real world things.” Jemma says “Are you confident you are going to perform well? You’re going to come in 10 seconds.” To which Chad say’s “No I’m not” and he goes on to explain he has a tactic to ensure it will go well.

Sarah talks to Big Brother in the diary room about her lack of confidence since leaving the band.

Amelia tells Derek and Shaun in the garden, with Sam listening on “It’s alright, he knows I am besotted with him, I can’t be arsed hiding it.” Amelia goes on to tell Sam that she can’t wait for him to meet her family on Friday to a coy and quiet Sam.

Chad and Sarah have an argument about how to promote their relationship on the outside world.

Sam is talking to Big Brother and says “Amelia has this thing where she says everything negative about her. It kind of annoys me, your near perfect mate, just shut up. I kind of just want to say, ‘Amelia you must know, you’re an all-round diamond so it annoys me, why do you put yourself down when you know you’re not.” Sam goes on to talk about how he felt about Amelia talking about him meeting her family and says he wants her to slow down.

Sarah and Chad are in bed together, and she apologises for their argument. She says she has been damaged and they kiss.