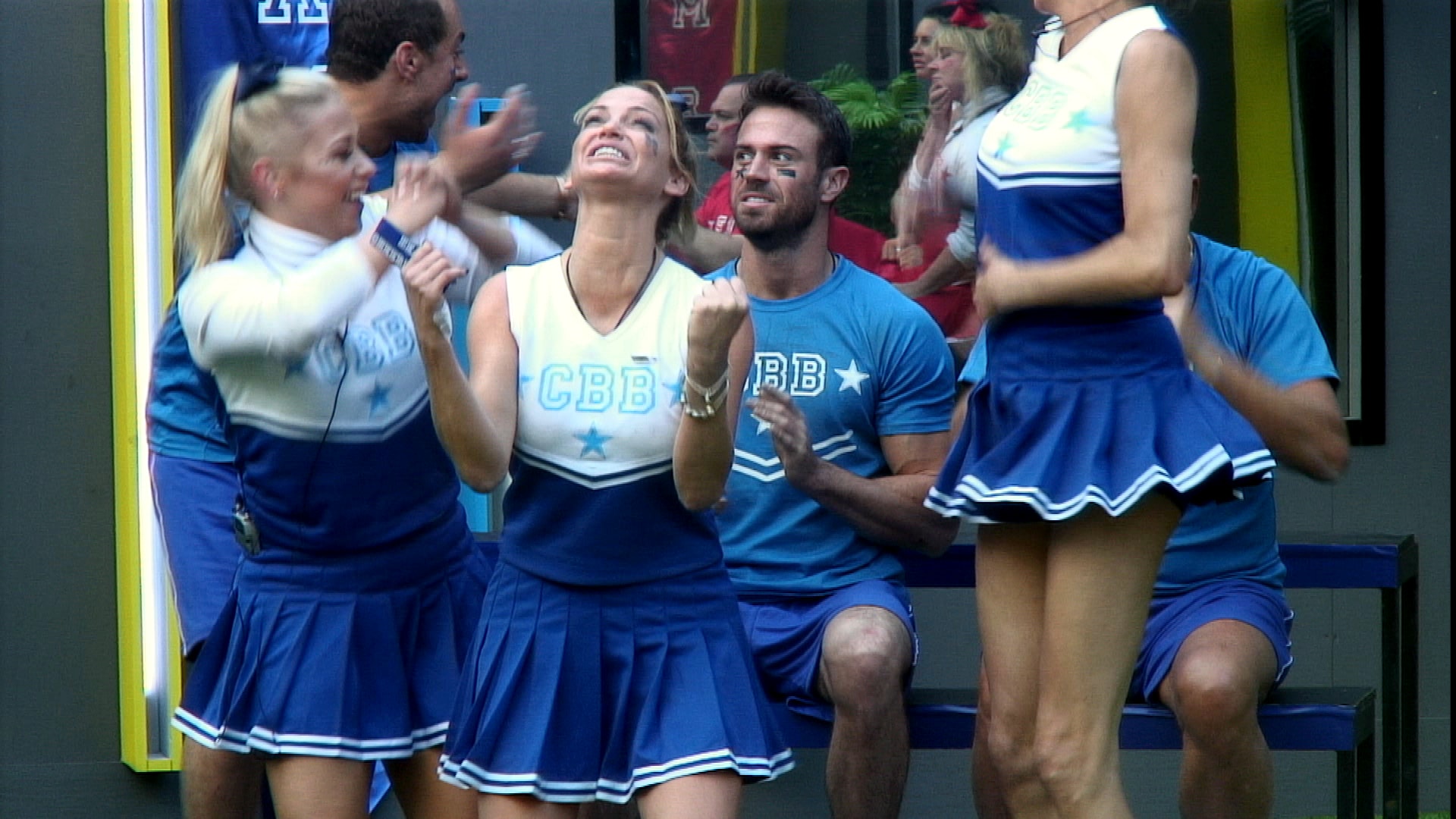 On tonight’s Celebrity Big Brother… Brandi tells Chad that Sarah is stringing him along and the house find out who’s facing eviction.

Housemates wake up and head outside to continue the cheer leading task. Chad tries to kiss Sarah, she turns away telling him “not in here.” Chad replies; “Figure out what you want…”

Helen talks to Big Brother in the diary room about the housemates; “The younger people are looking hungrily around for places to put their testosterone. Samuel, his testosterone is wavering between Jemma and Amelia.”

Sam and Jordan are talking about Amelia. Jordan tells Sam: “I thought you were going to get up and kiss her last night.” Sam replies, “I so nearly did!”

Jemma and Chad are talking about Chad’s ‘pretty good kiss’ with Sarah. Chad doesn’t know how to react next. Jemma tells him; “Whatever you do, do not sleep with her unless she’s single.”

Brandi and Chad are talking about Sarah. Brandi tells Chad she thinks Sarah is stringing him along; “She gets the sexiest guy. You get a broken heart”

Big Brother gathers the housemates in the garden for the next part of the cheerleading task. Elected team members go head-to-head and answer questions based on public Twitter comments. Housemates must use a ‘cheer’ to answer. The winning team must then select two housemates from the challenging team to be saved from eviction. Remaining opposing team members will go up for public vote

Big Brother asks the housemates a question. The teams must guess what percentage the blue cheerleading team received in the public social media poll voting for the best cheer routine. The closest team to the percentage, will be immune from eviction, and must decide who to save and who will face the public vote for Tuesday’s eviction – REVEALED IN TONIGHT’S SHOW

Paul, Jemma and Brandi disagree over the housemate’s immunity nominations in the task

·      Sarah is talking to Amelia and Chad about Jemma; “I could see her getting out of-hand again tonight. I don’t want to be in the firing line.” Amelia responds; “Just don’t bite. Don’t retaliate. Just ignore it.”

Jemma goes to the diary room and talks to Big Brother about Sarah and Chad; “She is an absolute d**k tease. She doesn’t even like him!”

·Amelia, Jemma and Brandi are talking about earlier disagreements in the house. Jemma tells Amelia: “You don’t speak up mate, and it does my head in.” Amelia gets upset and replies; “Every time I try and say something, somebody speaks over me. I can’t even get my words out half the time.”

Jemma uses a piece of chalk left over from the task to write ‘snakes everywhere’ on a wall in the living area. Big Brother makes an announcement and asks Jemma to return the chalk immediately

Derek speaks positively to Shaun and Helen about his time in the Big Brother house; “I prefer to be in here, than actually go on a holiday and not enjoy my holiday.”

Jemma and Brandi start chanting ‘get Paul out’ from the living area. Paul walks out of the kitchen and Jemma starts to chant ‘Danan, Danan, Danan’. Paul tells her; “You’re a p*ss head.” Jemma replies, “So are you. Well, you used to be.” Paul goes to the diary room to talk to Big Brother about Jemma‘s chanting.

Sam and Amelia are walking round the garden. Sam tells her; “I’m so afraid of f**king something up. I see you as a possible part to my future.” Amelia responds; “I get excited to wake up in the morning in here because I get to see you.”

Big Brother calls Jemma to the diary room to talk about the writing on the mirrors; “I think certain housemates are snaky. So I tried to express myself!”

Sarah and Chad are in the bedroom. She tells Chad; “I feel safe when we’re hanging out. I can be myself. It helps me relax.” He replies; “Just be you. That’s all I ask.”