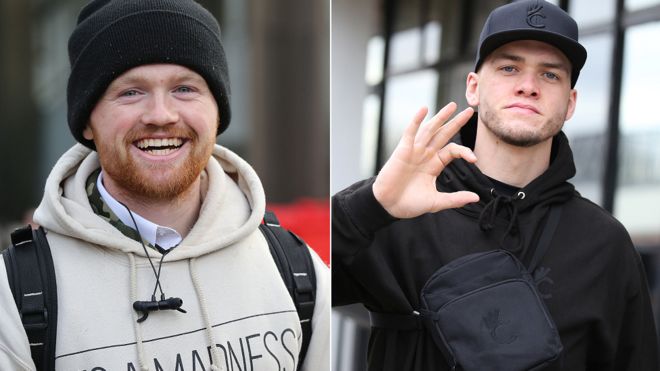 Ally Law and Ryan Taylor who were the two YouTube pranksters who filmed themselves breaking into the Big Brother house during an eviction show have been convicted.

St Albans Magistrates’ Court heard that it was the second time in a week that they had broken into the Big Brother compound.

The duo were found guilty of two charges of aggravated trespass.

The court heard how Law and Taylor climbed over a fence and made their way along a set of outside walkways, staircases and scaffolding at the back of the set.

The court also heard Law had dropped his trousers and jumped into the housemates’ hot tub while wearing a GoPro camera. Footage from the camera  showed security guards arriving in the garden.

Footage of the guards shouting at him to get out was played in court, with a female security guard eventually jumping in to pull Law out of the water.

A clip of footage broadcast as part of the Big Brother programme was played to the court of the moment during an eviction announcement when some housemates alerted Big Brother the intruders were outside.

In a police interview, Law said his only intention was to provide “entertainment” and apologised for “any fear” he might have caused.

Taylor said in his police interview that having posted a short clip online from another intrusion on 19 January, he had been contacted by the “media” and asked to go back inside. He said he had been “motivated by money”.

Solicitors defending the pair both claimed the intrusion was carried out as a “prank” and fines should be imposed as “actual disruption and harm was quite limited”.

The pair are due to be sentenced on 5 March.